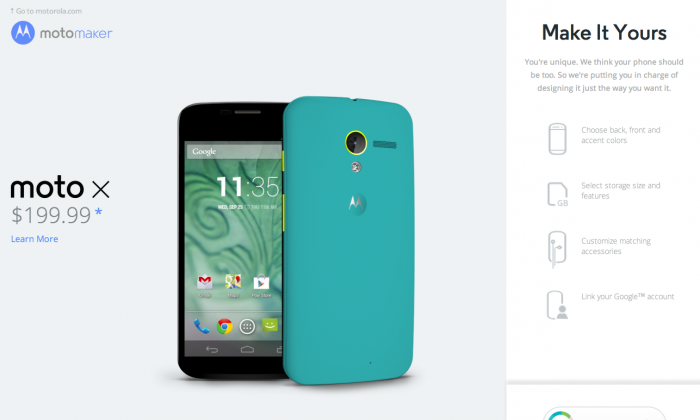 A screenshot of Motorola's "Moto Maker," which lets you customize your Moto X phone. The price difference in assembling the Moto X in the United States compared to Asia is only $4, according to research firm IHS iSuppli. (Epoch Times)
Tech

Ever since news that Google’s recently launched Moto X would be assembled in the USA leaked out, the world has been watching closely at how the search giant’s smartphone arm would do it. What would be its killer features? Final price of the phone? Profit margins and additional cost compared to “made in Asia”?

While most of the questions surrounding price and features were answered over time and with the Moto X’s official announcement, the one thing left to imagination was the additional cost Google and Motorola would be incurring in assembling the phone in the USA.

Yesterday, electronics supply chain analyst IHS iSuppli gave away the answer as part of their price breakdown for the Moto X.

The price difference? A mere 4 dollars.

That’s right, chumps. According to IHS, the price difference between Motorola’s “assembled in the USA” Moto X and Apple’s made-in-Asia iPhone (and other smartphones) is a little less than one cup of your favorite Starbucks coffee. Specifically, assembly costs for the Moto X are $12 in the USA; in contrast, Apple’s assembly cost for the iPhone is $8 and Samsung’s cost for the Galaxy S4 is $8.5 (both in Asia.)

“In spite of its ‘Made in the USA’ label, overall costs are still competitive with similar smartphones,” Andrew Rassweiler, senior director, cost benchmarking services for IHS said in the press release. “Our initial estimate suggests the additional costs of onshoring the Moto X are relatively low.”

One thing to note is that Motorola is only assembling the phones (and not making all the components) in the USA, at a factory in Fort Worth, Texas. That factory used to belong to Nokia, and Motorola spent $25 million investment shoring up the factory for its use. A lot of the components are still being sourced from Asia–as well as 16 states in the United States, as Motorola CEO Dennis Woodside says with pride–but final assembly of the product is done in good ol’ America.

Motorola is reported to currently have around 2,000 workers at the Texas plant, and its local presence also gives it quick turnaround time and allows the Moto X to be more heavily customized than its competitors. Add to that Motorola’s almost pervasive advertising for the Moto X (their ads are omnipresent near New York’s Penn Station), and you have a winner for “Made in the USA” and fine-grained customization for what is likely your most-used electronics product during the day.