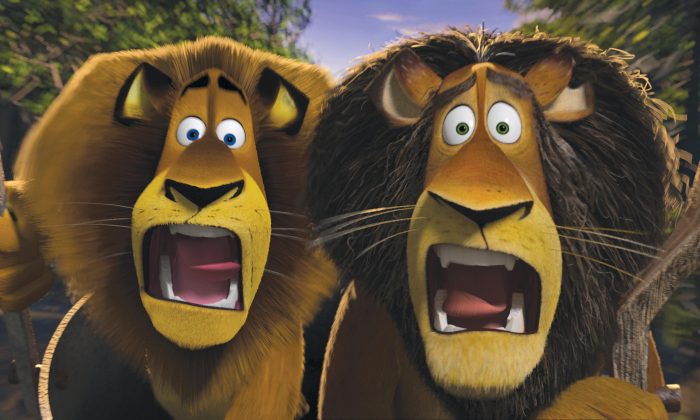 By Matthew Rodgers
Print
Toy Story aside, few animated films actually warrant a sequel. And when Madagascar was released in all its Tex Avery infused, eye-popping colourful CGI, to millions of kerchings and very little soul, few would have demanded the further adventures of the highly paid voiceover actors as Central Park Zoo animals.

With this inevitable release you would have at least expected Dreamworks to improve on the things they got wrong first time round. Namely, too much of Ben Stiller’s Alex the lion and not enough of the crackpot team of military penguins. So it’s an elephant sized disappointment that Escape 2 Africa is much more of the same, tame stuff with even more Stiller and even less of our flightless friends.

Stiller’s extrovert lion, David Schwimmer’s neurotic giraffe, Chris Rock’s motormouth zebra, and Jada Pinkett Smith’s pampered hippo are about to leave Madagascar via King Julian’s (voiced brilliantly by Sacha Baron Cohen) plane catapult. Making it as far as Africa, and thanks to some inept piloting from the black and white crew, they crash land in the watering hole where Alex grew up as a cub. Alex is confronted with the parents he never knew (father Zuba brought to life by the late Bernie Mac), and each of our endangered species must overcome their own personal obstacles to find that most cliched of animated oucomes, “acceptance”.

That might sound a bit cynical for an analysis of a kids film but so often animated features think their key demographic will be happy with bright colours and tired slapstick. The message of the movie is fine, but in its simple repetition of the first films moral dilemmas, boredom often ensues until one of the monkeys makes a joke about “slinging poo”.

On the subject of misjudging the young ’uns sat goggle-eyed in the front row, there is a truly brilliant, but genuinely frightening introduction in which a young Alex is lured away by poachers as his father is shot at. It’s up there with Bambi’s mother and Simba’s father. Add to that some uncomfortable, overtly sexual hippo flirting that stampedes on the word subtle and you have a mess the size of a dung heap.

Few will be bothered by this as they flock to feed these animals the cash they’re after, but there’s more awe, emotion and comedy in a 20-minute Discovery Channel safari documentary.