Mad Monk Swept the Qins Out of a Temple 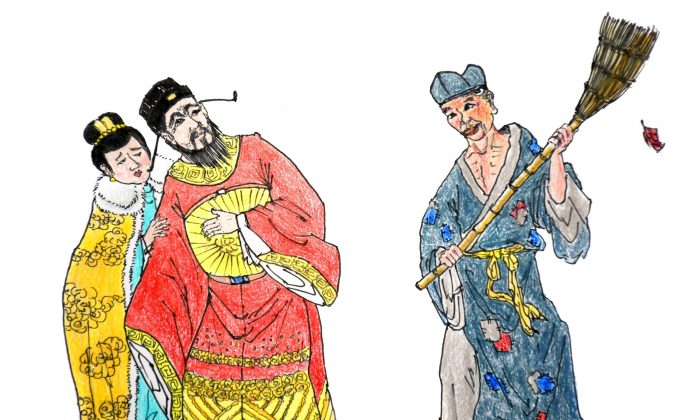 There is a clay statue of a mad monk in the 500 Arhats Hall at Xiyuan Temple in the city of Suzhou. The monk has ten defects: a crooked mouth, a hunchback, crossed eyes, bat ears, ringworm of the scalp, uneven legs, scrawny hands, slanted shoulders, a pigeon chest, and a wonky nose. He is thus known as the “Monk With Ten Imperfections”.

His looks are special, but not ugly. The belt around his waist looks as real as a cloth belt.

It is said that the mad monk used to be a poor scholar who often criticized the imperial court and condemned major national issues. He sat the imperial exams a few times, and his essays were always full of scorn and derision. For that reason, he did not even pass his exams at the county level in his thirties, despite being a man of letters.

It then dawned on him that society was losing its moral compass. He decided to take the monastic vow and became a cooking monk at a temple. He behaved in a deranged manner and eventually came to be known as the mad monk.

Jin Wuzhu, a prince and military general of the Jurchens, invaded Southern China in 1140 during the Song Dynasty (960–1279). In his attack, he employed the Crutched Horse Formation (a formation that encircled the enemy) and the Iron Pagoda Horsemen (in which the cavalry and their horses were in armour from head to toe). Nonetheless, his troops were crushed by Yue Fei.

As Chancellor Qin Hui of the Song was working in collusion with Jin Wuzhu, he convinced the Song Emperor to issue twelve golden plates to bring Yue Fei back from the battlefront. But Yue Fei refused to plead guilty to the trumped up charges, even after two months of torture.

Qin Hui was at the east window of his drawing room trying to think of a way to kill Yue Fei when his wife, Lady Wang, came up with the plan of slipping a phony execution order inside an orange to give to the presiding judge.

On the morning of the first day of the lunar new year, Qin Hui and his wife were offering prayers at a temple when Qin Hui spotted a piece of yellow paper on the wall with a poem written on it at a slant: “Subduing the tiger is easy, but letting it go will be difficult. The plot hatched before the east window beats the series of stratagems. The evil woman is wicked to wag her tongue. It petrifies and distresses an old monk like me.”

Qin Hui was dumbfounded. His wife looked in the direction he was looking. To their horror, they realized the poem was talking about Fengbo Pavilion, where Yue Fei was killed. The couple stared at each other. It took quite a while for Qin Hui to recover from the shock. “This is outrageous!” he said.

The abbot of the temple happened to come along. Qin Hui barked at him: “Who wrote this poem? Track him down!”

The abbot could tell Qin Hui was someone of authority and he could not afford to offend him. He trembled and replied, “I will check it out.”

The abbot soon returned with another monk who had a stick and a bamboo broom in his hands and was limping. Qin Hui and his wife recognized him. He was the monk who ate dog meat. They exclaimed, “I see, it’s a filthy monk who wrote the poem!”

The mad monk retaliated in an aloof manner, “I see, it’s an ingrate who’s making all the noise.”

Qin Hui flew into a rage. “All the dog meat you ate has gone to your head! Go down on your knees and show your respect to me!”

The mad monk limped and pointed to his knees. “I can’t. My knees are suffering from burning frostbite.”

Qin Hui realized the mad monk was no fool. He decided to pick on the monk’s tattered cassock instead. “How dare you come to me dressed in rags! Do monks not behave with propriety?”

The monk sniggered. “Why do you talk like that when you’re well-clothed and well-educated? Do not judge me by my clothes. My appearance may be ugly, but I have nothing on my conscience. Likewise, some officials may look respectable, but they’re wicked and their conscience is constantly bugging them.”