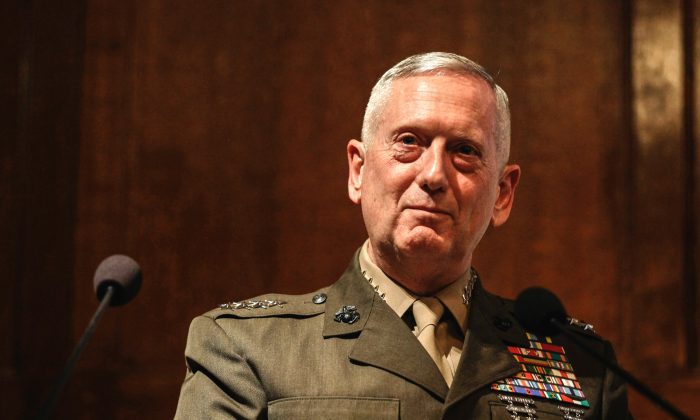 The culture of the Pentagon may see a shift under the leadership of James “Mad Dog” Mattis, the four-star general recently named by President-elect Donald Trump as the next secretary of defense.

“With Mattis as secretary of defense, you will have a big defender for the troops at the spear-end of the fight,” said Furlong, who currently works for news website OpsLens.

It was a rocky year for the U.S. military in 2010. Gen. Stanley McChrystal retired as Afghanistan commander after criticizing the Obama administration in a Rolling Stone article. He was replaced by now-retired Gen. David Petraeus, and Mattis was in turn chosen to replace Petraeus at CENTCOM.

Intel analysts at CENTCOM believed their analysis was being “politicized” and valuable information ignored and discouraged if it went against current U.S. policies or political correctness, said Furlong.

Some military leaders were forced into early retirement because of this policy, and Mattis was allegedly one of them because of his warnings about Iran and the rise of the ISIS terrorist group.

The difference between Mattis and Petraeus at CENTCOM, said Furlong, was that while Petraeus is more political and astute, skilled at “navigating the military within political constraints,” Mattis was more of a deep thinker—less political but with a stronger focus on personal principles.

At CENTCOM, Mattis protected troops from the politics of war, said Furlong.

“He’s a good buffer between the warfighting guys and the president—one like we’ve never had before.”

As secretary of defense, he will likely continue to create that culture.

“He is a guy who will not allow further politicization in the Department of Defense,” said Furlong.

Mattis also showed a deft hand at working with NATO and managed to cooperate with allies without being distracted from ensuring U.S. forces in Afghanistan had what they needed, said Furlong.

“He’s not just a door-kicking guy. He can run in the deep political circles.”

NATO allies, many of whom knew Mattis from his time as NATO’s Supreme Allied Commander for Transformation, seem to be welcoming the appointment.

“I’m looking forward to working with him, as are our military, who know him very well,” said Fallon.

Mattis has earned a reputation for speaking his mind and meaning what he says. That has given the media plenty of juicy quotes to dredge up, but it should also give America’s would-be adversaries pause. They will know that U.S. forces are led by a fighting man that will push hard on security matters.

“He’s extremely competent,” Furlong said. “But he is outspoken. He is not a yes man by any stretch of your imagination.”

“With him as the secretary of defense, we’ll send a totally different deterrent signal to people around the world, from China to wherever. He will call it like it is.”

Furlong believes that with Mattis, as well as Trump’s choice for national security adviser, Gen. Michael Flynn, “you will get unvarnished truth.”

Mattis retired in 2013 after 44 years in the U.S. Marine Corps, and over the years, he won deep admiration among the men and women who served under him.

“He was the kind of guy who was on the ground with the troops, and that’s why they liked him so much,” said Furlong.

Mattis preferred a firsthand understanding of the wars and would often go to the front lines to experience the battle directly.

This is a trait that Furlong said is rare among generals, but also not unheard of. He noted that McChrystal shared a similar leadership style. Mattis, however, was known for being particularly studious and focused.

Furlong described him as an “80/20 guy” who gives 80 percent of his focus to top priorities and 20 percent to lesser issues.

This gives him the capacity to “run with national security policy and also understand what the generals are trying to do below him.”

Mattis didn’t necessarily like being called “Mad Dog,” but he appreciated it, since the nickname was given to him by the troops on the front lines. His call sign was “Chaos.” Others called him the “Warrior Monk,” since he never married and instead dedicated his life to the Marine Corps.

Among the military’s intellectual class, Mattis is known as the “Warrior Poet” for his study of classic books and military thought. “He gets himself out of the morass,” Furlong said. “Here’s a guy with his character, who steps back at night and thinks of ways to think out of the box to get things done.”

This ability to think more broadly helps Mattis “beat the enemy without having to meet on the battlefield,” said Furlong.

Importantly for troops, Mattis also prioritizes their needs and is not a “heartless general,” said Furlong. Mattis would not send troops into battle with their hands tied behind their backs by politics.

“When you turn to military, you no longer need politicians telling them what to do—don’t need politics with suicide rules of engagement,” said Furlong.

“Over the last few years, the generals have become too politically attuned.”

Mattis also understands how hard war is on people, and his concern for the troops is sincere.

“He is not a warmonger, he’s not out looking for a fight,” Furlong said. “But when there is a fight, he’s in there for the troops. He’s in there to win, and that’s his ethos.”