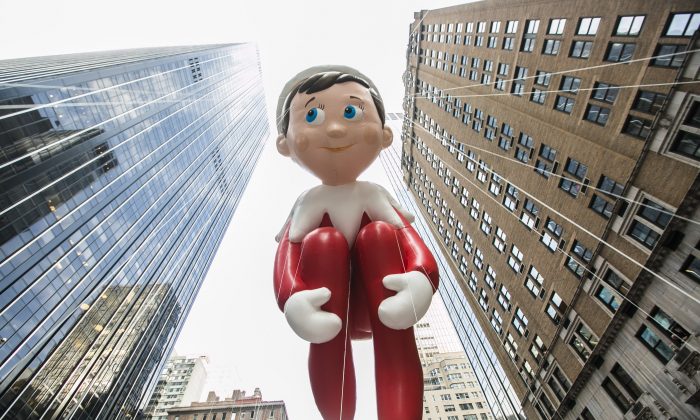 NEW YORK—With over 8,000 performers and 3.5 million spectators, the annual Macy’s Thanksgiving Day Parade is more than a New York tradition; it’s the most famous Thanksgiving celebration in the country.

Enjoyed by young and old, New Yorkers and tourists, and some 50 million home viewers following on TV, the parade has come a long way since it was first organized by Macy’s immigrant employees in 1924.

People were especially thankful for this year’s warmer weather, which drew record crowds to the event—in spite of heightened security concerns this year.

Amid unsettling times, the New York Police Department stepped up its security to keep the day fun yet safe. Police Commissioner William Bratton announced on Nov. 25 that there would be more than 2,500 police officers stationed along the parade route, making it the largest police presence ever at a New York event.

Epoch Times took to the streets to find out what people thought about this year’s parade, and whether the heightened security affected their experience.

Dr. Bhaskar: The vibe of having all the people around us … adds a whole new dimension to the experience when you’re actually here than watching it on T.V. [It’s a] once in a lifetime experience. One has to come here and experience it.

Steve Handel: I love the parade, this is our 20th year in a row coming here. It takes about two hours to get here on the train from Massachusetts. We come here every year just to see the parade. It’s one of the biggest events in the country and we love to see it.

It’s a great event for New York, to see a part of the city that you wouldn’t normally see, and to see all these people out together at once is pretty cool.

At this particular time no one is going to compromise our free spirit and how we live. I have faith in the NYPD. I am an American. I am not going to stop living my life and being free. I will show my support for the country by coming out.

I love the family-oriented Thanksgiving parade from Macy’s. The only thing that I was a little bit upset about was the extra barricading. I know they’ve hyped up the security because of all the threats, but we are still managing to enjoy it.

This is my city and they’re going to have to fight me too. I love my city. I’m not scared of anybody who’s trying to mess up something.

Simone Adam: We were planning our vacation before all this happened in Europe so we were thinking about where to watch it, should we go there, and is it a crowded place. But I think you should not hide and let the terrorists get what they want. We should go out and celebrate. It’s Thanksgiving and everybody should celebrate it his or her way. And for us [the parade] was one part of it.

Maria Kratsios: I only thought of it in passing that it might be an issue but I’m not really concerned. There’s a lot of security out. We were here during 9/11, this is our home, we are not going to change the way we live in response to terrorism.

Al Amkrah: New York seems to have a pretty good handle on it. They’ve been doing a lot of emergency protocols. So I’m very impressed by the security. Plus I’m from here, I’m a native. At the end of the day, I’m not going to let no one scare me.