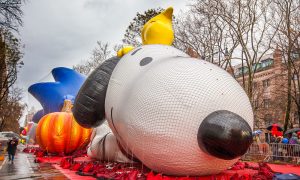 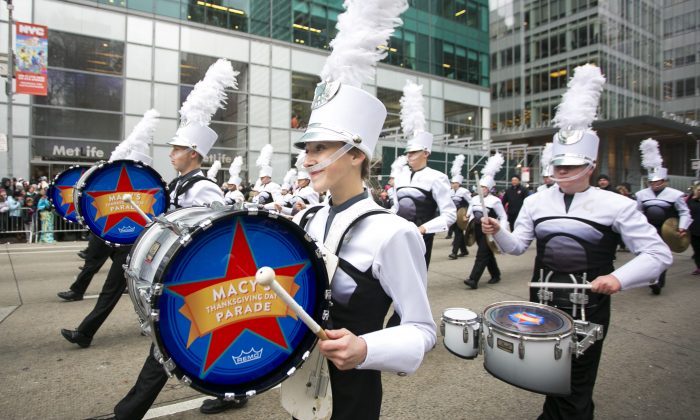 In addition to the crowds of two million gathered on the street, many cheering the band on, Bonfield also had the support of his twin brother and sister, Dylan and Katie, both 14, his mother, and grandmother.

“If it wasn’t for him, we wouldn’t be here,” said his mom, Nanci Bonfield, 43, who drove her kids in a day-long car trip from Indiana with plenty of bathroom breaks.

She wore a pin with her son’s face on it on the lapel of her winter coat as she and her family toured the city, awaiting the band’s performance.

Drew’s grandmother, Jackie Petersen, 65, of Columbia, Mo., flew from Kansas City to New York and met the Bonfields there.

High school marching band members participating in the Macy’s Thanksgiving Day Parade greatly appreciate and feel the love and support that their families and friends show them.

“We’re glad we had a great audience,” said Philip Cave, 18, who played tuba in the Macy’s Great American Marching Band, which takes students from all over the country.

It was his first and last time performing in the parade, said Cave, who is a senior at Broughton High School in Raleigh, N.C. To advance this far, he had to undergo rigorous training and a placement audition, as well as be recommended by his band director.

“I think all of this hard work that we put in and in the seven years I’ve played, have all really paid off for me,” he said.

The trip to New York was pricey for some. The bill reached an estimated $2,300 for the Winston Churchill Marching Band from San Antonio, Texas.

Many schools turned to fundraising to alleviate the financial burden on students. They marketed the trip as a package deal—not only were kids getting to put on a performance of a lifetime, they were also learning more about their country and history.

On the itinerary for Center Grove, for example, was a dinner cruise to see the Statue of Liberty.

A total of 12 bands performed at Macy’s, and many people especially arrived just to hear them.

Corey Jahlas, 25, an alum of a Michigan high school was invited to perform the mellophone, which sounds similar to a French horn, with the Madison Scouts Anniversary Corps, from Wisconsin.

Although the band was scattered all over the country, practicing individually and then meeting in Suffern, N.Y., for a final rehearsal, they performed cohesively Thursday.

Jahlas found the day to be amazing.

“It’s the spirit of the holiday and the togetherness,” he said, smiling.