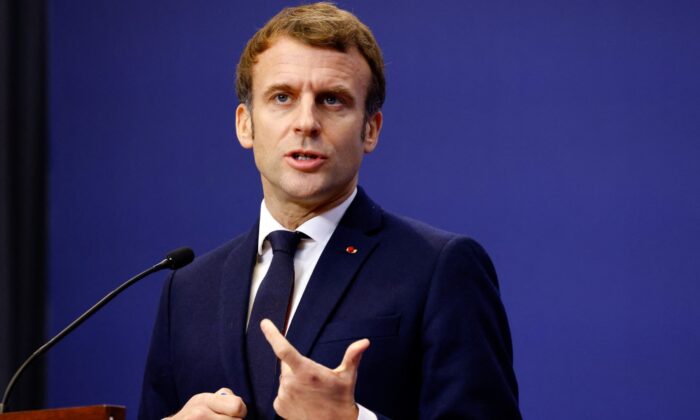 French President Emmanuel Macron gestures as he speaks during a joint press conference with the Hungarian Prime Minister in Budapest on Dec. 13, 2021. (Ludovic Marin/AFP via Getty Images)
WORLD

French President Emmanuel Macron has drawn condemnation from political opponents after he made a controversial statement this week, saying he is determined to make the lives of French citizens who refuse to get vaccinated against the CCP virus miserable.

“I’m not for pissing off the French … Now the unvaccinated, I really want to piss them off. And so, we’re going to keep doing it, until the end. This is the strategy,” Macron said during an interview with Le Parisien on Tuesday.

Macron went on to say that he “won’t send [unvaccinated people] to prison,” but he will make their lives more complicated and encourage people not vaccinated against COVID-19 to get the shot by “limiting as much as possible their access to activities in social life.”

A parliamentary debate proposing a new set of CCP (Chinese Communist Party) virus rules for unvaccinated people was suspended on Wednesday as opposition lawmakers accused Macron of using divisive language, urging the president to explain himself.

“A president cannot say such things,” Christian Jacob, chair of the conservative Les Republicans party, told parliament as it discussed a bill to make it mandatory for people to show proof of vaccination to enter many enclosed public spaces.

There has been a lot of reactions to Macron’s comments—both in support and against. It also comes at a sensitive time, with a presidential election due in April in which he is expected to run, though he has not yet officially announced if he will be running.

Prime Minister Jean Castex said he supports the president in remarks to the Senate on Wednesday.

“The president’s remarks are perfectly consistent with what we’ve been doing” to tackle the CCP virus pandemic crisis and urge French citizens to get jabbed, he said, news agency AFP reported.

French government officials have vowed to enact by mid-January as planned a law to block unvaccinated people from hospitality venues, despite the legislation hitting a procedural hitch in parliament overnight.

Until now, France has enforced a CCP virus health pass, which means in order to get into restaurants, cafes or cinemas, or board trains, people need to either show a fresh negative COVID-19 test, or proof-of-vaccination.

The legislation will remove the option of showing a negative test, effectively barring unvaccinated people from hospitality venues or trains.