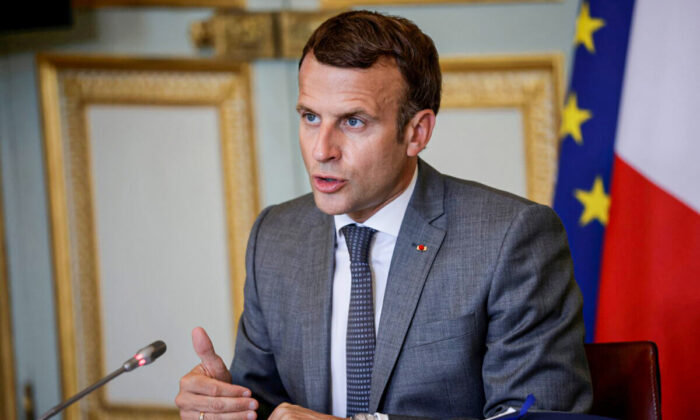 French President Emmanuel Macron delivers his statement at the end of the 5th France-Oceania Summit, held via video-conference, at the Elysee Palace in Paris, France, on July 19, 2021. (Yoan Valat/Pool via Reuters)
Europe

French President Emanuel Macron announced on Dec. 8 that the EU is considering new legislation to hold tech companies liable for hate speech that occurs on their platforms.

“This is unprecedented European regulation to fight online hate, to define the responsibility of these large platforms for their content,” said Macron, as reported by Reuters. “Every day, we have to deal with issues such as anti-Semitism, racism, hate speech and online harassment. There is no international regulation on these subjects today, strictly speaking.”

The announcement comes at a pivotal moment for Macron, who is preparing for France to assume the rotating presidency of the Council of the European Union on the eve of the 2022 French presidential election.

Though Macron has not announced a reelection bid, many French observers expect the president to run again.

The announcement about the regulation of hate speech has particular connotations in this election, as Macron faces two nationalist opponents whose critics have labeled them bigots and xenophobes: the National Rally candidate Marine Le Pen and the independent candidate Éric Zemmour, who announced his bid last month.

Though Macron did not mention these rivals in particular, his announcement comes amid a backdrop of polarized opinion regarding hate speech, with particular implications for the president’s political opponents.

Marine’s father, Jean-Marie Le Pen, has been convicted numerous times under existing French hate speech laws for his remarks on the Holocaust and Islam. Marine has taken great pains to distance herself from the more incendiary remarks of her father, but the controversy persists, with commentators still accusing the younger Le Pen of racism and extremism.

Zemmour, though not beleaguered by the family history of Le Pen, has nonetheless acquired a reputation as a firebrand and an outspoken proponent of French nationalism. His penchant for politically incorrect, controversial remarks has garnered comparisons to former U.S. President Donald Trump. Like Jean-Marie Le Pen, Zemmour has previously been convicted under existing French hate speech laws, having previously paid two fines and currently facing a third conviction for “public insult” and “incitement to hatred or violence.”

Throughout his term, Macron has struggled with consistently negative approval ratings, although this is typical for the French presidency, a notoriously thankless job. Despite his general unpopularity, Macron’s position as a perceived centrist gives him some flexibility to triangulate among his rivals, and he is widely considered the front-runner of a prospective reelection bid.

However, Macron’s hate speech proposals put him in tension with the longstanding French tradition of radical free speech, as established in the Declaration of the Rights of Man and Citizen and incorporated into the French constitution.

In 2015, after Islamist terrorists perpetrated a mass shooting of the headquarters of the satirical magazine “Charlie Hebdo”, the subject of free speech became a cause célèbre in France and abroad, even as some commentators accused “Charlie Hebdo” itself of hate speech.

Thus, by giving his public support to international EU hate speech regulation, Macron may inflict some measure of harm on his own potential reelection bid. With this new announcement, Macron has declared his support for a more comprehensive and trans-national hate speech regimen by announcing the new proposal.

However, it is not clear how such a proposal will be perceived in the nation of Voltaire and Houellebecq, a country that has long prided itself on brash opinions and radical politics, which may find these traditions in the crosshairs of hate speech regulators in Brussels.