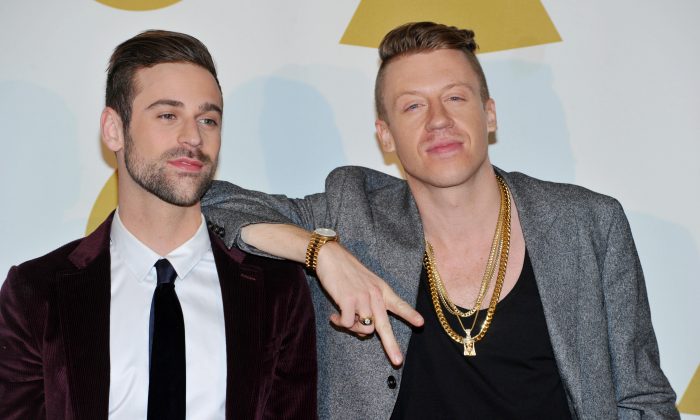 Macklemore, the Seattle-born rapper, has not died as some Twitter users have claimed.

There was a hashtag going around saying #RIPMacklemore on Tuesday, confusing many. It appeared to trend again late on Wednesday night.

However, there’s no credible reports that Macklemore, whose real name is Ben Haggerty, had died.

The hashtag appears to be an attempt to make fun of the 31-year-old. “Sorry to hear about the Death of Macklemore. I guess his toe is gonna pop some tags,” one person wrote on Twitter.

He tweeted last on Wednesday night, saying: “Buck has been killing verses.”

At the same time, the term #RIPJasonMraz went viral on Wednesday night and early Thursday morning, leading many to believe the singer is dead.

As the death hoax was going viral, Mraz tweeted at 12:40 a.m. ET: “The peoples climate march. This Sunday. Perfectly aligned on a day off! Join us.”

But users on Twitter were also confused by the hoax.

Mraz on Wednesday also did an interview with New York’s DNAInfo while working on a community garden in Williamsburg, Brooklyn.  “If I hadn’t been a singer-songwriter, I would have been a landscaper,” Mraz said Wednesday.

He also performed a few days ago in Boston.

NEW YORK (AP) — CBS and Rihanna are splitting up, more fallout from the Ray Rice domestic violence incident and the turmoil it has caused for the NFL.

The network said Tuesday it was permanently editing a song featuring Rihanna’s voice out of its Thursday night NFL telecasts — after the singer issued a profane tweet about it.

A portion of Jay-Z’s “Run This Town” featuring Rihanna was cut from last Thursday’s Baltimore Ravens vs. Pittsburgh Steelers game because CBS was covering the controversy over Ravens running back Rice’s assault of his then-fiancee. CBS planned to use the song Thursday and for the rest of the season, but Rihanna tweeted, “CBS you pulled my song last week, now you wanna slide it back in this Thursday? … Y’all are sad for penalizing me for this.” She added an expletive.

CBS issued a statement saying that it was “moving in a different direction” with different theme music.

The song was one of a handful of elements CBS cut out of its inaugural Thursday night football telecast. At the time, CBS Sports President Sean McManus said Rihanna’s own history as a victim of domestic violence was one part of the decision but not the overriding one. The song was to be featured in all six of the Thursday night games CBS was broadcasting this fall, plus eight more on the NFL network.

The decision means a significant loss of weekly exposure for Rihanna’s work: more than 10 million people watched the opening of the telecast last Thursday, according to the Nielsen company.