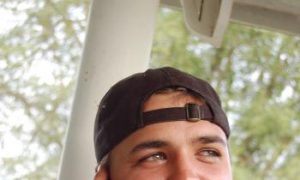 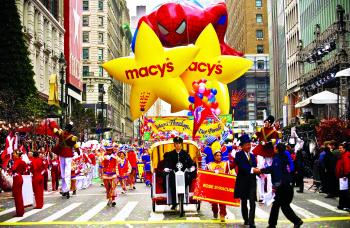 Participants in the 83rd Annual Macy's Thanksgiving Day Parade greet onlookers as they march through Manhattan on Thursday. (Aloysio Santos/The Epoch Times)
US

By Evan Mantyk
Print
NEW YORK—The 83rd Annual Macy’s Thanksgiving Day Parade went off without a hitch on Thursday, attracting millions of spectators on a Thursday morning with only a slight chill in the air.

Giant inflatable characters, including Spiderman and Buzz Lightyear from Toy Story, floated overhead while clowns, celebrities, and Santa in his sleigh waved to onlookers attending the parade.

Each year, more than 3 million people attend the parade, and another 44 million tune in to watch it live on television.

The parade first began in 1924, when Macy's employees incorporated animals from the Central Park Zoo in the Thanksgiving Day Parade and its success made it an annual event. The parade made its first televised appearance in 1946 across New York City, and nationally in 1947.

The helium-filled balloons first made their appearance in the Macy's parade in 1927, and the tradition has continued until today. During World War II, however, due to shortages in rubber and helium, the balloons were deflated and donated. They provided 650 pounds of rubber used in the war.

This year the parade had a new route that avoided pedestrian islands created on Broadway. This is the first time in 82 years that the parade has changed course.

Developed by a working group including city agencies and Macy's, the new route was wider, providing more space for the parade's procession and more viewing space for the millions of spectators.