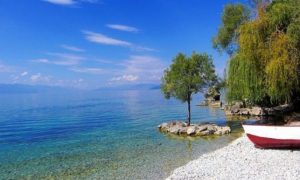 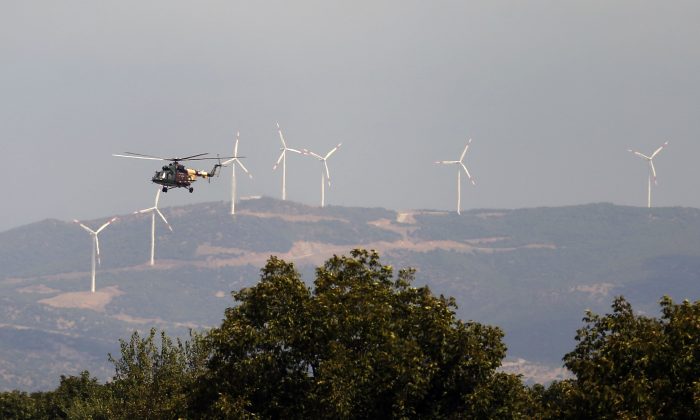 A police helicopter flies near the border between Greece and Macedonia, near the southern Macedonian town of Gevgelija, Thursday, Aug. 20, 2015. Macedonian police stepped up the security at the border with Greece apparently trying to stem recent surge of migrants who are coming from Greece. (AP Photo/Darko Vojinovic)
Europe

GEVGELIJA, Macedonia— Macedonia declared a state of emergency Thursday as it ramped up security on its border with Greece, stranding thousands of migrants on a dusty field.

The government said it is deploying troops as it tries to stem a surge of migrants from the Middle East, Asia and Africa.

Macedonian police spokesman Ivo Kotevski said both police and the army will control the 50-kilometer (30 mile) stretch of the border in order to stop a “massive” influx of migrants coming from Greece.

“This measure is being introduced for the security of (Macedonian) citizens who live in the border areas and better treatment of the migrants,” he said.

The measure could create a huge backlog of migrants on the Greek side of the border, from which some 2,000 a day have been illegally crossing into Macedonia, an impoverished country overwhelmed by the surge.

Hundreds of migrants from the Greek island of Kos planned to move into Macedonia in the next few days.

Thousands of migrants were stranded Thursday in a no man’s land near the Macedonian town of Gevgelija, from which they planned to catch trains that would take them to the Serbian border on their way to Hungary, which is building a fence to try to keep them out. A police helicopter hovered nearby and officers in armored vehicles watched the crowd.

Hundreds more people, including many women with babies and children, joined the group as the night fell. They lit fires as they prepared to spend the night out in the open near the Greek border village of Idomeni. Some sat on railway tracks, blocking trains from crossing the frontier.

Small groups who tried to cross into Macedonia were escorted back to the border.

“We can’t believe that we are here from this morning,” said Ahmet Husa of Syria. “People from Syria escaped from war, escaped death and we want to see our future in Europe. We need this road to see our future.”

Until now, the border has been porous, with only a few patrols on each side. Sealing it would disrupt the so-called Balkan corridor for migrants who start in Turkey and take boats to Greece or walk to Bulgaria, then make their way through Macedonia or Serbia en route to the wealthier countries of the European Union.

Almost 39,000 migrants, most of them Syrians, have been registered passing through Macedonia over the past month, double the number from the month before.

For months, the train station in Gevgelija was the scene of skirmishes between baton-wielding policemen and migrants trying to secure places on overcrowded trains.