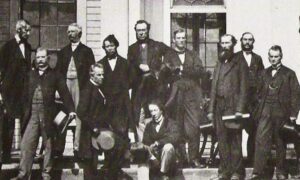 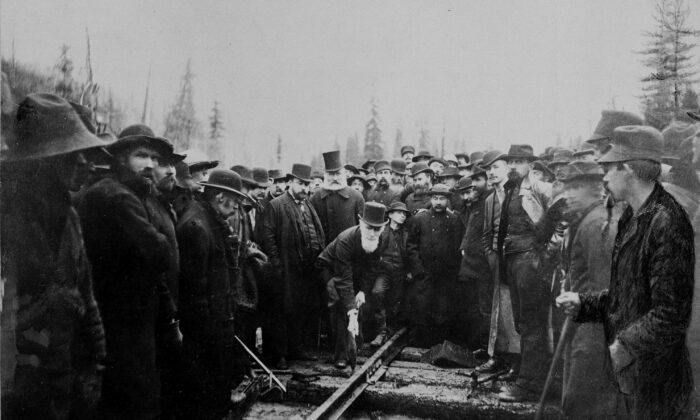 The Hon. Donald A. Smith drives home the last spike for the Canadian Pacific Railway in Eagle Pass, B.C., on Nov. 7, 1885. (The Canadian Press/National Archives of Canada)
Viewpoints

This is Part 4 of a multi-part series examining Macdonald’s legacy. Previous parts can be found in the following links: Part 1, Part 2, and Part 3.

When a handful of sparsely populated British colonies in the northwest corner of the vast American continent came together in 1867, few informed observers of world affairs thought the new Dominion of Canada had any chance whatsoever of surviving.

What political philosophers would later call “social capital”—the deep reserves of trust and reciprocity required to hold a society together—was sadly lacking among Her Majesty’s remaining subjects in North America.

In 1867, according to the commonly understood meaning of the term, Canada was in no way a “nation-state.” It was a patchwork of three nations: British, French, and Indigenous. Within and between themselves, the new Canadian provinces struggled with ethnic and religious discord.

Even after the new union was established, many of Canada’s best and brightest inhabitants were choosing to move on in search of better opportunities in the USA.

In his second volume on Sir John A. Macdonald, Richard Gwyn called attention to a post-Confederation analysis in The New York Times that confidently declared, “When the experiment of the ‘Dominion’ shall have failed, as fail it must, a process of peaceful absorption will give Canada her proper place in the Great North American Republic.”

In Britain, the influential Oxford scholar Goldwin Smith predicted that the British North American colonies would, before long, unite themselves with the USA.

Contrary to the conventional wisdom of the times, the history of Canada was to unfold in a less predicted direction.

By the time Canada celebrated its first 100 years of Confederation in 1967, it was a stable, prosperous, sovereign federal parliamentary democracy occupying an enormous portion of the North American continent. It had expanded from the original four provinces in the East to include a total of ten provinces and three territories, which now extend from the Atlantic to the Pacific and northward to the Arctic Ocean.

Today, Canada covers some 9.98 million square kilometres, making it the world’s second-largest country by total area. But little of the nation’s unforeseeable growth can be attributed to luck or historical accident.

Glib Marxist academics claim that the efforts of exceptional men and women have no real impact on the course of history. They tell impressionable students that it is all about a dialectical process. They say we are all swept along by the laws of history leading inevitably to the withering away of nations in favour of a global socialist utopia.

Macdonald’s record in office proves otherwise. He defied expert predictions. It was his government’s national strategy that led to Canada’s enormous success over our first 100 years of nationhood.

John A. Macdonald was the architect of the Confederation that founded the Dominion of Canada. Confederation was based on a series of compromises, and he was exceptionally skilful in bringing intransigent adversaries together and completing the deals required to unite the British North American colonies.

Macdonald was ahead of his time in the development of a public-private initiative that produced the financing and technical capability for the building of one of the longest railways in modern history.

In the decades after Confederation, he understood the crucial need for a transportation infrastructure that would open room for the nation to grow. To this end, he dedicated himself to building a line that would eventually link the Canadian provinces from the Atlantic to the Pacific oceans.

The Canadian Pacific Railway was constructed over vast stretches of seemingly impassable terrain. Without the CPR, Canada could never have survived to become the country it is today. It is highly likely that Western Canada would have been swallowed up by a rapidly expanding USA. In this sense, Macdonald was not only responsible for Canada’s conception and birth, he was also responsible for our very survival as a nation.

High tariffs were intended to broaden the base of the national economy and restore Canadians’ confidence in the development of their country. He sought to expand the union, settle the West, and develop a strategy that put the interests of Canadians first. His national policy principles guided successor governments well up to the middle of the 20th century.

Canadian electors and people of all classes placed a high value on Macdonald’s tireless dedication to the new nation. Throughout his tenure in federal politics, he won six majority governments. Macdonald’s last election, in 1891, was fought successfully in defence of his National Policy and against the Opposition’s call for commercial union and “unrestricted reciprocity” with the United States.

A Leader Worth Remembering

Macdonald biographer Gwyn reckoned him to be among the most talented leaders of his century, up there with other world-class icons such as Abraham Lincoln, Benjamin Disraeli, and William Gladstone.

Macdonald may not have been heroic in the same sense as a George Washington and other leaders who played significant military roles in the birth of their nations. However, over the first 100 years of Canada’s history, most men and women of goodwill regarded John A., “warts and all,” as a man worth remembering and the country he sought to build worth celebrating.

Today, most of Canada’s formative institutions, schools, universities, newsrooms, and entertainment studios are controlled by people with a very different view of the country’s history and its worth. I will elaborate on that in the final episode of our series on the legacy of Sir John A. Macdonald.