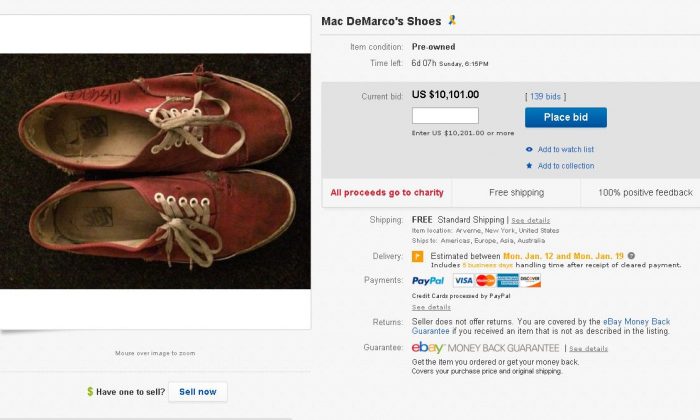 Mac DeMarco, the Montreal-born and Brooklyn-based singer, is selling his worn Vans sneakers for more than $10,000 on eBay. (screenshot)
Entertainment

Mac DeMarco, the Montreal-born and Brooklyn-based singer, is selling his worn Vans sneakers for more than $10,000 on eBay.

The torn-up red shoes are signed by the singer. The shoes, which are now selling more than $10,100, can be viewed here.

Per Consequence of Sound:

The red autographed Vans have accompanied him onstage countless times over the last 12 months — he lists all the actual concert dates here — and the wear and tear definitely shows. Despite the kicks’ shabby state, however, the bidding has currently reached a whopping $10,001 with six days still left in the auction. (Sounds like quite a few people banked mad $$$ over the holidays!) All the proceeds will go to the Willie Mae Rock Camp for Girls.

DeMarco also issued a statement on the eBay listing:

I’m selling an old pair of my shoes. I’ve John Hancocked the left shoe. Will anyone buy an old stinky pair of shoes? I don’t know. lets wait and see.

I’ll probably throw some other crap in the box before shipping it, I dunno what.
If you’re one of those kids who tried to take them off my feet while I was crowd surfing at some point this year, nice try jackass. But hey, here’s another opportunity for you to have them.

All of the profit will go to Willie Mae Rock Camp for Girls.

Q: But I love these red vans! I’ve seen you 3 times this year and you were always wearing them. So I don’t know if the entire world wants to know, but I sure as hell want to know: what’re you gonna be wearing on your feetsies now?

A: Still red vans. This pair was worn for the period mentioned, I’ve probably had about 10 pairs now, they usually last about 4 months

Q: Hey, Mac. We’re about the same age and I had similar shreddy guitar influences while learning guitar. I however lost the drive to practice but your music has rekindled the flame. Could you recommend me any guitar exercises or habits to help improve my alternative picking and overall strumming rhythm? Your guitar playing is so smooth, fluid, and appears effortless. Thanks, dude.

A: I dunno really, right now I’ve been practicing the mmixolydian mode a lot, I want to play like jerry Garcia.