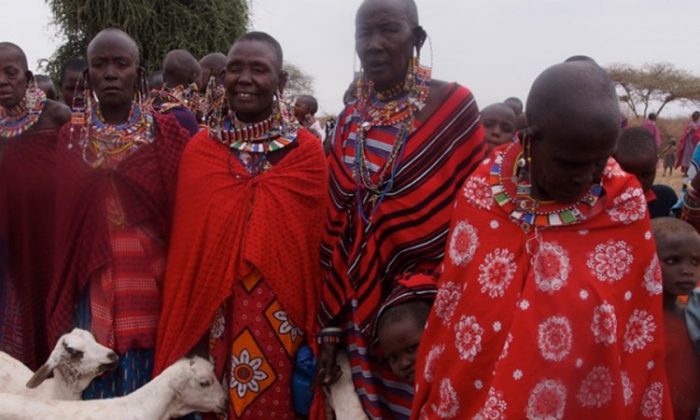 In a traditional two-day ceremony in Kenya, the Maasai, one of the oldest cultures in Africa, changed the fate of 52 young girls in a historic alternative rite of passage performed without female circumcision.

Maasai men and women who accepted the new ceremony took a monumental leap forward in health and education for their culture, causing reactions across the globe.

Three Maasai women were selected by the African Schools of Kenya (ASK) to talk with the girls about issues ranging from their basic human rights as young women to reasons for using birth control.

Meals were prepared and delivered to the girls, and they stayed together overnight in the classroom on Aug. 27.

“There was no holding back on the information given to the 52 girls attending the first Alternative Rites of Passage without cutting,” said Teri Gabrielsen, founder of ASK, which funds educational courses in Africa.

The 52 girls, including the chief’s own daughters, paraded through their village early Saturday morning wearing their traditional all-black dresses and crowns, slowly walking to the school room for the very first two-day ARP ceremony.

Special recognition was given to the four cutters: They each received a milking goat for their willingness to participate in the ceremony and for supporting the “non-circumcision” of the girls.

On day two, the mothers helped their daughters get dressed in their traditional ceremonial dresses and crowns. The two-day ARP ended with ceremonial dancing, a feast, and the presentation of certificates acknowledging each girl entering womanhood without being circumcised.

Female circumcision, widely known as female genital mutilation (FGM), is illegal in Kenya and is punishable by law, yet it is still practiced in many countries worldwide.

Many regions in Africa and some countries in Asia and the Middle East widely practice the ritualistic procedure, according to the World Health Organization (WHO).

Traditionally, young women who had not yet been circumcised were ostracized by their peers. The women who had endured the unlawful procedure were considered acceptable members of society and were deemed suitable for marriage, as it increased their value in the community because the procedure is considered to be customary.

Instruments traditionally used to perform the cut are sharp metal tools, knives, and other crude objects, and the procedure is usually not carried out by trained medical professionals. The effects of FGM can severely burden the women and often bring on medical complications, placing additional obstacles on the health services and systems in their countries.

The physical pain resulting from the practice has immeasurable psychological impact on these young girls, who look to the adults as well as their peers for solutions. This year, educated Maasai women are avoiding the risk of the physical and psychological damage associated with female circumcision by participating in the first ARP of its kind.

Tonte Ikoluba is a tribal descendant of a family who practiced the age-old custom of circumcision in Nigeria. She is from the Ijaw tribe and is now a social worker living in New York. Ikoluba participated in the ritualistic rites of passage at the age of 13 with great trepidation.

“I was 13 years old when I was circumcised, and both of my parents as well as my grandmother were with me and they prepared me for the traditional ceremony,” said Ikoluba.

“I knew it was something that had to be done, but I was scared because some people died or got very sick afterward. I was told by my family that I could not be a full woman until my male part was cut off.

“Some people ran away and so I wanted to run away, but my mother assured me that I should not be scared. She said she would hold my hand and that I would be okay.”

Ikoluba described her experience of being circumcised, saying that while she was being cut, she felt as if she was going to die. She described the complications that came after the procedure.

“It was very painful to urinate after the cutting. I had infections and fever and lots of nightmares. I later found out that a lot of girls did not go through with it and they turned out to be okay,” said Ikoluba.

“I felt tricked. I was told I was going to be a complete woman and then found out they actually made me incomplete. I am now missing something important—my womanhood.”

According to H. Scott, a registered nurse and maternity nurse in New York City, “FGM is a horror and the more enlightenment shed upon this ritual, the better. I have had my share of labor patients who have suffered this atrocity and they suffer that much more during delivery when their scar tissue tears. Some have to be c-sectioned. … Makes my heart cry.”

As the suffering of young women continues to surface in cultural hamlets across the globe, studies and personal opinion continue to find no sensible reason for female circumcision, considering it to be an act of violence against women.

According to the WHO website, it is estimated that 100 million–140 million women and girls have already been subjected to some form of FGM.

Ikoluba is a resident volunteer for the Campaign Against Female Genital Mutilation (CAGeM) in New York City. New York State has the second largest population of FGM victims next to California, according to the CAGeM website.

“Female mutilation is against the law, but people are still dying from it,” said Ikoluba. “Just earlier this year, one girl died from the bleeding and her sister ran away from our village to come to a CAGeM shelter because she was next in line. They just ignore the law. Nobody goes to jail, nobody gets arrested.

“I recently attended a conference in New York hosted by CAGeM . I heard them talk about a free surgery and hospital service for victims of FGM. I did some research on my own and found that I could regain feeling and reduce the pain by having the surgery. Until then, I never knew I would be able to feel complete again. I know I can never be 100 percent complete, but I want to be as close to it as possible.”

With the influx of immigrants that come to the United States from countries that continue the practice, girls who become United States citizens are at risk of family pressure to perform their native cultural rites of passage.

A study in the United Kingdom is mapping the current situation and trends of FGM in 27 European Union member states and Croatia. The study was launched this year upon the request of EU commissioner Viviane Reding, according to the European Institute for Gender Equality website (EIGE).

The triumphant stand of the young Maasai girls may send a message of change to families who are weighing the facts against the myths and current findings about the practice in their own rites of passage ceremonies.

Gabrielsen of ASK, Maasai elder and director of ASK chief James Ole Kamente, local grassroots organization Voices of Hope, and a resident nurse from Loitokitok General Hospital in Kenya all fully participated in an ARP ceremony, leading in making a change in the current practice of female circumcision and the eradication of the practice entirely.