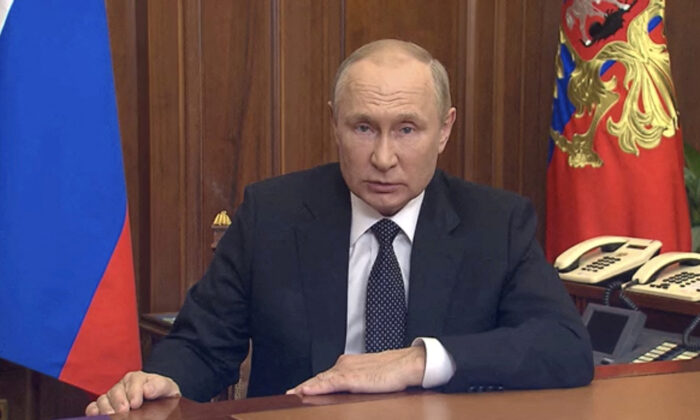 Russian President Vladimir Putin makes an address on the conflict with Ukraine, in Moscow on Sept. 21, 2022, in this still image from video. (Russian Presidential Press Service/Kremlin via Reuters)
Viewpoints

MAD Once Described the Nuclear Impasse; in Ukraine, It’s Gone Back to Its Original Meaning

Ukraine’s two largest Western backers, the United States and the United Kingdom, have so far committed $15.8 billion and $2.6 billion, respectively, in security assistance to Kyiv, and one of Liz Truss’s first announcements as prime minister was that the UK would match that in 2023, so she isn’t expecting the war to end anytime soon.

The mainstream media have presented the conflict in very black and white terms: “Bad guy Putin invades innocent country—West must do something,” even as no one can be sure that this “something” won’t lead eventually to thermonuclear war.

Last month, the UK’s Ministry of Defense assured me that a hotline exists between London and Moscow to prevent escalation of the conflict.

They may believe that, but on Sept. 21, Vladimir Putin ordered Russia’s first mobilization since World War II and warned the West, “If the territorial integrity of our country is threatened, we will without doubt use all available means to protect Russia and our people—this is not a bluff.”

So far, Western leaders have been treating Ukraine as a proxy war, but that’s a very dangerous miscalculation.

Those wars were fought in far-away countries such as Korea, Vietnam, Afghanistan, Angola, Egypt, and Syria, and the superpowers engaged with the different warring factions to gain strategic territory and ideological influence, and to keep their industrial military complexes in business.

Whoever won or lost, those wars never turned nuclear, and the big powers never fired a shot against each other. This conflict is right on Russia’s border, giving it an altogether higher order of magnitude in Moscow.

Another mistake the West is making is to see this conflict as an isolated event that began on Feb. 24. However, for Moscow, it really began on April 4, 1949, when the North Atlantic Treaty Organization (NATO) came into being.

The Soviet Union was concerned that the organization wouldn’t confine its political aspirations to Western Europe alone, and this has proven true, as NATO’s expansion eastward toward Russia has never really stopped.

The new UK prime minister often refers incorrectly to NATO as merely a defensive force, but, although one of its roles was to stop Soviet expansionism, it had political aims, too.

As NATO’s website acknowledges, its other two purposes were “forbidding the revival of nationalist militarism in Europe through a strong North American presence on the continent, and encouraging European political integration.”

Those ambitions would eventually lead to the creation of the European Union, whose strategy has always been to diminish the power of nation-states by ceding their sovereign authority to the unelected European Commission.

An example of how far its influence now spreads is the role it played in the 2014 Maidan Revolution that saw the elected and pro-Russia Ukrainian President Viktor Yanukovych overthrown in a coup and replaced by the pro-Western Petro Poroshenko.

Many accused the European Union of having some involvement in that bloody uprising that also suited NATO’s eastward push.

But it was far from an outright victory, and it began the ongoing Russo–Ukrainian war, of which the current Russian invasion is the latest development.

Surprisingly, one of the EU’s harshest critics was none other than Boris Johnson.

“If you want an example of EU foreign policymaking on the hoof, and the EU’s pretensions to be running a defense policy that has caused real trouble, then look at what has happened in Ukraine,” he said in 2016.

That was before his own ratings plummeted following his partygate scandal, and he began to view intervention in Ukraine instead as his last-chance saloon.

Is NATO Putting a Noose Around Russia?

It was six years after the founding of NATO that the Soviet Union created its own version, the Warsaw Pact Defense Treaty, in response to West Germany joining the Western military alliance in 1955. Greece and Turkey had already preceded it in 1952, but Germany—the old enemy—was the tipping point.

Following the collapse of the Soviet Union in 1991, the Warsaw Pact was dissolved, but not NATO. In 1999, three former Warsaw Pact nations, the Czech Republic, Hungary, and Poland, even joined it.

That was the year that Putin came to power. During his early tenure, Bulgaria, Romania, Slovakia, Slovenia, Estonia, Latvia, and Lithuania all joined the Western alliance, but he drew the line with attempts by Georgia and Ukraine in 2008.

He launched a five-day invasion of Georgia and only pulled his troops out on the proviso that they would forget about membership in NATO and the EU. Ukraine also agreed to those terms—at least publicly.

Croatia and Albania successfully joined NATO one year later, followed by Montenegro in 2017. Now, both Sweden and Finland are seeking full NATO membership.

Russia’s annexation of Crimea happened in 2014, six years after the then-president of Ukraine, Viktor Yushchenko, threatened to stop Russia’s Black Sea fleet from operating out of Sevastopol harbor, which it had been renting and sharing with the Ukrainian Navy since its independence in 1991. This is the only port Russia has access to that doesn’t freeze over in the winter.

Although an agreement was eventually reached, the Maidan Revolution in January 2014 probably convinced Putin that he had to act to secure his nation’s naval defense. Two months later, he moved his troops surreptitiously into Crimea, unopposed.

As for Putin’s 2022 invasion of Ukraine itself, that happened just five days after its current president, Volodymyr Zelenskyy, gave an incendiary speech at the Munich Security Conference on Feb. 19, announcing he would be seeking NATO membership for his country.

Was that a coincidence? I doubt it very much. Putin had repeatedly warned U.S. presidents from Bill Clinton onward that Ukraine was his absolute red line for NATO membership. Kamala Harris apparently didn’t read that memo, or didn’t care, as she stood smiling with Zelenskyy in Munich.

Most likely, Putin miscalculated that his invasion would be a repeat of Georgia, where 850 lives were lost, and the country retained its sovereignty after five days, apart from the two breakaway states of South Ossetia and Abkhazia.

Parallels are also there with his designs on the Donbas region in Ukraine, rather than the whole of the country. The major difference to Georgia is that the West is now involved militarily, leading to exponentially larger numbers of casualties on both sides.

The development of weapons of mass destruction was thought to have made all-out war between the nations that possessed them pointless. That policy of mutually assured destruction, or MAD, has kept relative peace in Europe and around the world for more than 70 years.

Yet, somehow the Western powers have convinced themselves they can use conventional weapons—and the soldiers they have trained—to attack Russian troops without any cost to themselves.

Ironically, despite demonizing Putin, they’re relying on him not to do the unthinkable, and millions of lives now rest on that calculation. But what if he one day concludes, “If we detonate a tactical nuclear weapon or two to save our country, would they really end the world over it?”