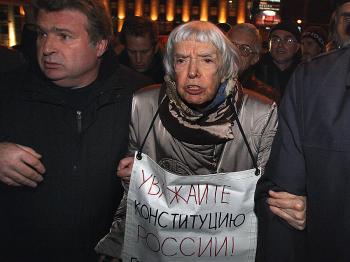 Kremena Krumova
Kremena Krumova is a Sweden-based Foreign Correspondent of Epoch Times. She writes about African, Asian and European politics, as well as humanitarian, anti-terrorism and human rights issues.
View profile
Follow
biggersmaller
Print
The arrest of human rights advocates on Triumfalnaya Square in Moscow Dec. 31 has spurred criticism from the international community.

Head of the Moscow Helsinki Committee, Lyudmila Alexeyeva, was detained with 50 other dissidents during a protest on New Year’s Eve. Alexeyeva, 82, was arrested just prior to speaking to the crowd. She is a recipient of EU Sakharov Prize, receiving the award last year.

The event was announced in due time to Moscow authorities and held despite their disapproval. About 400 people attended the rally—which was broken up by hundreds of police when the protesters began shouting and showing banners, which read: “Putin behind bars!”

“I didn’t have time to open my mouth, I just made a hand signal. I have no idea why I was arrested,” Alexeyeva said on Moscow Echo radio. “Usually, they [the police] write in the statement that I resisted the forces of law and order. They offered to release me, but I refused, demanding that they release all those in police vans.”

The protest was part of a campaign in support of Article 31 from the Russian Constitution, which guarantees freedom of peaceful gatherings of citizens.

“I am deeply disappointed and shocked by the fact that Lyudmila Alexeyeva and other human activists were detained in Moscow that night,” Buzek said. “The police action was absolutely disproportionate. The detained protesters should be released immediately. In a democratic country, people should have the right to organize protests, even against governments and authorities. Freedom of speech and expression is one of our basic human rights.”

He also expressed hope that Russia will become a partner on whom the European Union can rely, respecting basic human rights.

The United States National Security Council Spokesman Mike Hammer expressed his concern about the “detention of protesters, including prominent human rights defender Lyudmila Alexeyeva, and reports of their mistreatment by authorities while in custody.”

The Russian Right Cause political party also sent an open letter to the Russian president, demanding an apology.

Co-leader of the party, Leonid Gozman, said in the letter that the arrest of the oppositionists and human rights activists is a heavy blow to the president’s reputation, at a time when citizens are hoping for more democratic values, Kasparov.ru reported.

At the end of every month, opposition activists hold such an appeal at Triumfalnaya Square in Moscow. They are hoping to rename the square “Freedom Square.”

Sakharov Prize, a Tradition of Sacrifice

Since its establishment in 1988, the Sakharov Prize is given by the European Parliament every year for contributions to defending human rights. The award is named after prominent Soviet physicist, dissident, and human rights activist Andrei Sakharov, a winner of the 1975 Nobel Peace Prize. He was unable to collect the award in person as he was banned from going to Oslo.

Last year, Lyudmila Alexeyeva, one of the three winners of the Sakharov Prize was fortunate enough to attend the ceremony in Brussels. The other two winners were also present: Sergei Kovalev, founder of the first Soviet human rights organization, the Initiative Group for the Defense of Human Rights in the USSR, and Oleg Orlov, chairman of the board of the Memorial Human Rights Center.

Alexeyeva is one of the most long-term human rights activists in Russia. Together with others, she founded the Moscow Helsinki Group in 1976, and is still acting chairwoman of the group.

In 1977 she was forced to leave the former Soviet Union and lived in exile in the U.S. until 1990, when she returned to Russia.