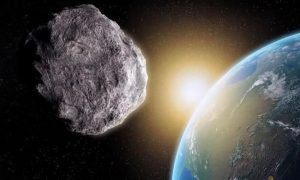 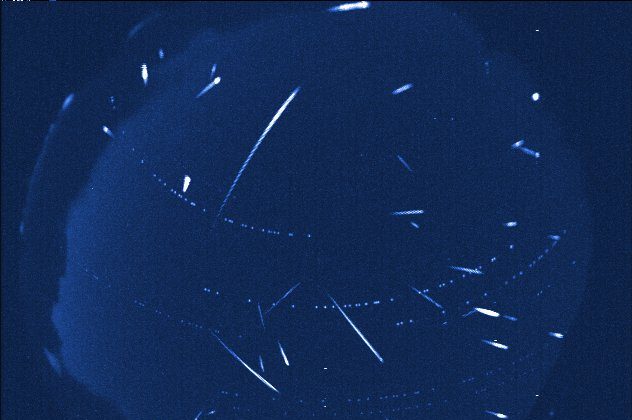 The Lyrids begin on April 16 and go through April 25.

The Lyrids are a medium strength shower that usually produces good rates of meteors for three nights around the peak, according to the American Meteor Society.

The image indicates the general region of the sky from which the Lyrid meteors appear to emanate (red dot). This point, called the radiant, is really an optical illusion – the meteors are moving along parallel paths, but appear to come from a single point, just as a stretch of parallel railroad tracks will appear to meet at a point on the horizon. (NASA)

The meteors are known to produce fireballs, it says.

Although the peak rate of 15 to 20 meteors per hour is fairly low when compared to some of the other meteor showers, the Lyrids “are known to produce bright meteors, many with persistent trains,” according to Jane Houston Jones of NASA.

“If you’re under a dark sky, you can’t miss the beautiful river of stars near Lyra–a spiral arm of our Milky Way galaxy,” she said in a blog post.

The shower comes from Earth passing through a stream of comet dust from Comet Thatcher. “Flakes of comet dust, most no bigger than grains of sand, strike Earth’s atmosphere traveling 110,000 miles per hour and disintegrate as fast streaks of light,” Dr. Tony Phillips of NASA explains in another blog post.

“A typical Lyrid shower produces 10 to 20 meteors per hour over the northern hemisphere, not an intense display. Occasionally, however, Earth passes through a dense region of the comet’s tail and rates increase five- to ten-fold. “In 1982, observers counted 90 Lyrids per hour. Because Thatcher’s tail has never been mapped in detail, the outbursts are unpredictable and could happen again at any time.”

The next meteor shower, the Eta Aquarids, will peak on the night of May 5.

Lyrid meteors appear to stream from the bright star Vega in the constellation Lyra. (NASA)