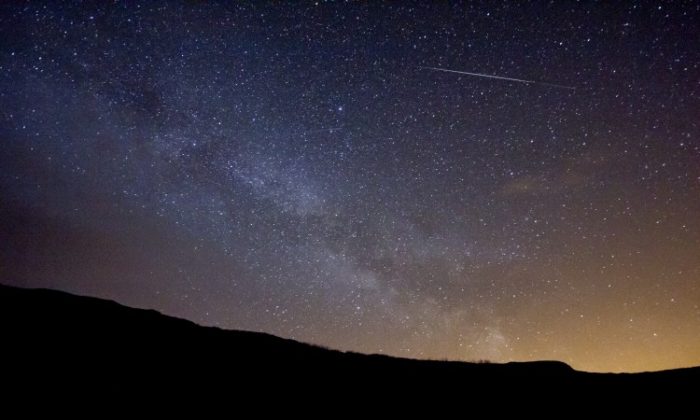 A Lyrid meteor with the Milky Way in the background, taken on April 15, 2012, in Perth, Scotland. (David Hannah)
Science

See a live feed of the meteor shower here.

Good news for skygazers: If you’re willing to stay up late this weekend, there’s a good chance you can see the Lyrid meteor shower, which peaks between midnight and dawn on the morning of Sunday, April 22.

According to NASA, the Lyrid meteors tend to be unpredictable, peaking at anywhere from 10 to 100 meteors per hour. So although we should expect to see only one meteor every four or five minutes on average, there is a chance that this year’s shower will surprise us with more impressive numbers.

If skies are clear, viewing conditions should be optimal this weekend. The moon will be new, so its light won’t wash out the meteors. The best time to watch for meteors will be the wee hours of Sunday morning, but if the weather forecast is cloudy, or you can’t stay up late that night, there are other options. Some Lyrids may be visible before midnight Saturday night. Viewers may also be able to see a few meteors Friday or Sunday nights, according to EarthSky’s meteor shower guide.

NASA has set up the first-ever meteor 3D photoshoot in conjunction with amateur astronomers and astronaut Don Pettit onboard the International Space Station (ISS).

“We’re going to try to photograph some of these ‘shooting stars’ simultaneously from ground stations, from a research balloon in the stratosphere, and from the space station,” said Bill Cooke at NASA’s Meteoroid Environment Office in a media release.

Although meteors can travel at extremely rapid speeds, Cooke estimates that there is a 1 in 6 chance of capturing images between wide-field cameras on the Earth’s surface and the ISS about 250 miles (400 km) above.

Cooke is hoping for plenty of meteor activity for the experiment and any photos gathered will be used to test models for processing data in the future.

“We’re laying the groundwork for small satellites that might one day be used to monitor meteor showers from Earth orbit,” he said.

The Lyrids were named after the constellation Lyra the Harp, because the meteors’ trails all appear to point back there. Actually, the meteors originate not from Lyra, but from the tail of Comet C/1861 G1 Thatcher, through which the Earth passes every year in April.

Lyra, and therefore the meteor shower’s center, will rise in the northeast around 10 p.m. local time on Saturday evening. Later, in the predawn hours, Lyra will be higher in the sky and easier to see.

However, you don’t need to know exactly where Lyra is to see the meteors. Just find a dark place outdoors at night, lie down on blankets or reclining seats, and keep your eyes on the sky. The meteors may flash across any part of the sky, although before midnight they will be most likely to come from the northeast.

When viewing the meteor shower, it’s a good idea to dress warmly and turn out all nearby lights to allow your eyes to adjust to the darkness. People living in big cities may want to drive out to the country for darker skies. The Lyrids are usually bright, so if you’re patient and conditions are good, it will not be difficult to spot them.