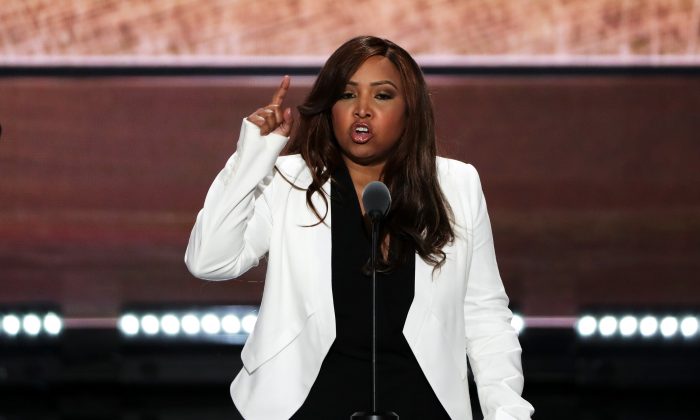 Lynne Patton, Vice President of the Eric Trump Foundation, delivers a speech on the third day of the Republican National Convention at the Quicken Loans Arena in Cleveland, Ohio on July 20, 2016. (Alex Wong/Getty Images)
Politics

Trump administration staffer Lynne Patton made an appearance at the House Oversight Committee hearing on Feb. 27, where Michael Cohen is currently testifying before a panel.

Cohen, who was President Donald Trump’s former personal attorney, has made a number of allegations against the president during the hearing, calling the president “racist” and a “conman.”

Rep. Mark Meadows (R-N.C.) used his questioning time to confront Cohen about his claims that the president is racist. He invited Patton, who is African American, as a guest in her personal capacity to challenge Cohen’s claims. He said Cohen made “very demeaning comments about the president that Miss Patton doesn’t agree with.”

“She says as a daughter of a man born in Birmingham, Ala., that there is no way that she would work for an individual who was a racist,” Meadows said, referring to Patton. “How do you reconcile the two of those?”

Cohen replied, “As neither should I as the son of a Holocaust survivor.”

Meadows then said he has spoken to Trump over 300 times and has not heard the president make any racist comments before in private. He then pressed Cohen to give evidence, including whether he has any tape recordings.

“Ask Miss Patton how many people who are black executives at the Trump Organization. And the answer is zero,” Cohen replied.

Patton, who serves as an official at the Department of Housing and Urban Development, did not speak at the hearing but had a statement entered on record. In a social media post on Feb. 27, she said that she was “honored to be the special guest of Rep. Mark Meadows.”

She added, “it doesn’t take you 15 years to call someone a racist. Unless they’re not one.”

I am honored to be the special guest of @RepMarkMeadows today. I am here in support of @POTUS and in support of the truth, as Michael Cohen (knows that I know) it to be. And the truth is that it doesn’t take you 15 years to call someone a racist. Unless they’re not one. pic.twitter.com/jPxeYTbTYT

In an earlier post on Facebook, Patton said she was sad that Cohen would “levy unsubstantiated claims—particularly those of bigotry and racism.”

“[T]here is no amount of money in the world that would make me work for a man who I thought—or even suspected—harbored bigoted ideologies,” she said in her post, praising Trump for raising “five of the most unbiased and open-minded children I’ve ever known. Four of whom I count among my very best friends, to date.”

Patton said she had also considered Cohen as one of her closest friends for the past 10 years, adding that Cohen was the person who introduced her to the Trump family.

“The only word that truly comes to mind this week is sad,” Patton wrote.

“I am sad that Michael has elected to leverage his own personal illegal activities into nothing more than political theater this week with the sole partisan purpose of embarrassing a sitting President with unfounded personal and/or professional gossip.

“I am sad that Michael would turn his back on a man to whom he has repeatedly said he owes everything in the hope of a reduced prison sentence,” she added.

Cohen was sentenced to three years in prison on Dec. 12 last year for tax evasion, bank fraud, campaign-finance violations, and lying to Congress. He was indicted as a result of the Russia investigation by special counsel Robert Mueller.