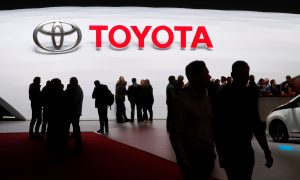 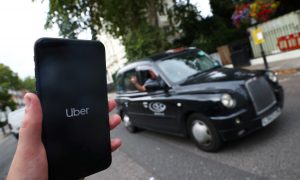 Signage for Lyft is seen displayed at the NASDAQ MarketSite in Times Square in celebration of its initial public offering (IPO) on the NASDAQ Stock Market in New York on March 29, 2019. (Shannon Stapleton/Reuters)
Companies

Ride-share company Lyft announced its commitment Wednesday to ensuring that every vehicle on its platform will be electric by 2030. The company will not offer financial support to drivers to make the change from gas-powered vehicles, but promised to work with policymakers, partners, and drivers to drive down electric vehicle (EV) costs and expand infrastructure and other incentives.

The company said that the motivation to electrify its fleet comes from a desire to reduce greenhouse gas emissions.

Vehicle emissions are one of the largest sources of climate pollution. That’s why we’re committing to reach 100% #ElectricVehicles on the Lyft platform by 2030, in collaboration with @EnvDefenseFund. It’s an ambitious goal, and we’re up for the challenge. https://t.co/dXxtV5yxft pic.twitter.com/ff9vqN4vdO

“Now more than ever, we need to work together to create cleaner, healthier, and more equitable communities,” said John Zimmer, Lyft’s co-founder and president. “Success breeds success, and if we do this right, it creates a path for others. If other rideshare and delivery companies, automakers and rental car companies make this shift, it can be the catalyst for transforming transportation as a whole.”

While Lyft’s current fleet is composed of less than 1 percent electric cars, the company’s statement said it would work with partners to ensure the transition to EVs for Lyft drivers as well as for the company’s rental cars and autonomous vehicles.

The company said it would call on industry, government, and nonprofit organizations to help overcome the two main barriers currently preventing wide-scale electrification: the high up-front cost of electric vehicles and access to reliable and affordable charging.

The company projects that EV ownership will become considerably more attractive in the next decade. According to its Path to Zero Emissions Plan (pdf), “For drivers’ personal vehicles, we expect the cost of EVs to continue to decrease—through more cost-effective battery and hydrogen fuel cell technology and policy support for vehicle purchasing and charging, among other things—so that drivers using personal vehicles will begin significantly ramping up adoption of EVs by 2026.”

Lyft expects that as EV technology continues to improve, the cost of the vehicles will decline. The company also hopes that policymakers will continue to push for more stringent vehicle emission standards, to improve capital cost incentives, and to roll out charging infrastructure.

Lyft’s to-do list is long, as a major task will include engagement with regulators and grid planners to ensure the mass deployment of EV charging stations in the resource management plans of municipalities across the United States and Canada.

The company says it already launched a “Green Mode” booking option in Seattle and Portland in 2019, which enables riders to select a driver with an electric or hybrid vehicle, and that the scheme has been used over 300,000 times since then.

The share of the US vehicle market taken by #EVs has fallen sharply this year. Support from the federal government will be essential for the #electrification of road transport to make real progress https://t.co/E7cbiTnwdl

“Electric and plug-in hybrid cars accounted for just 1.3 percent of US light vehicle sales in May, when they have typically been running in a range of 1.6—2.4 percent,” the company said. High EV sticker prices and extremely low gasoline prices may have contributed to the figures, according to Wood Mackenzie.

Not all commentators are convinced of the merits of ridesharing services. A study from the Union of Concerned Scientists in February found that today, due to deadhead trips—where in a round trip one way is an empty ride—and the fact that ridesharing is displacing other forms of transport, including walking, cycling, and public transport, the average rideshare trip produces between 50 and 69 percent more emissions than the trip it replaces.