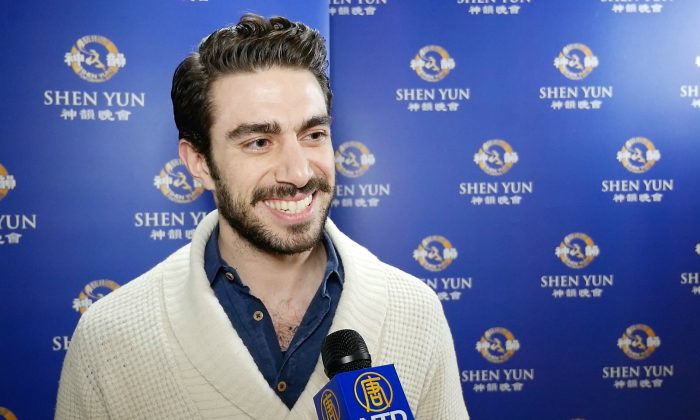 NEW YORK—In one of Shen Yun’s dance stories, the digital backdrop depicts the world amid chaos and destruction. When the Lord Buddha descends to the earth, those who side with the good are saved, and enter into a new era for humanity.

Mr. Kababulut, who is originally from Turkey, said the idea of good triumphing over evil is a universal value shared by all cultures.

Shen Yun is a performing arts company that seeks to revive 5,000 years of divinely inspired Chinese culture through music and dance, according to its website.

The traditional spiritual beliefs explored in Shen Yun’s dances were nearly destroyed during political campaigns in China, such as the Cultural Revolution of the 1960s and ’70s.

Kababulut feels that sense of spirituality is also lost in today’s world in general. “We’re losing our inner being, we’re losing our belief,” he said. “Belief in a higher being, belief in the unity—that’s what we’re losing. And we’re becoming more and more focused on unnecessities rather than the necessities.”

Kababulut comes from a family of Turkish carpenters. His grandfather was a cabinetmaker who designed the second biggest parliament building in the capital of Ankara, Turkey.

His father created the Lazzoni company with aspirations to take his family’s furniture-making skills across the world. Today, the brand features space-saving and fashionable furniture appropriate for modern urban living, and has showrooms in New York City, Germany, Turkey, Malaysia, and Cyprus