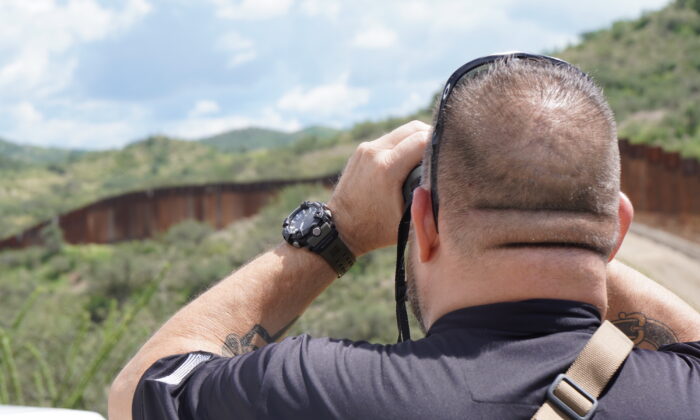 From grandmothers to college students, cartels recruit US citizens to break the law and become human smugglers
By Allan Stein

This is the second article in a series on illegal drug and human smuggling along Arizona’s border with Mexico.

CASA GRANDE, Ariz.—Mexican drug cartel money drives international human smuggling operations in the United States, according to the owner of a private investigation company in Arizona that deals with border security issues.

Without it, the industry wouldn’t exist, he says.

Sam (using a pseudonym, because of concern for his personal safety) told The Epoch Times that human smuggling along Arizona’s 372-mile border with Mexico couldn’t happen without a defective federal border policy, and added that American greed makes drug and human smuggling possible.

Many are everyday people you would never suspect of aiding and abetting the cartels in a lucrative business as inhumane as human smuggling. Still, these people have the best chance of sliding under the U.S. Border Patrol’s radar.

“The cartels would not be getting top dollar—$2,500 for each migrant entering the country illegally,” he said. “U.S. citizens would not risk going to jail if the money wasn’t there.

“The [cartels] control it. You don’t cross the border without paying the money. And if you can’t pay the money, you either are put to work carrying a load [of drugs],” or forced into sex trafficking or some other activity.

Alien smuggling in Arizona is a federal crime that carries a maximum of 10 years in prison, a $250,000 fine, or both.

In cases when death occurs, the maximum penalty is death.

In July, Benjamin Gallegos, 24, of Tucson received a two-year prison sentence after he pleaded guilty to conspiracy for supervising illegal aliens arriving from Mexico, Central America, and South America.

On Nov. 18, 2021, Amelia Gonzalez-Lira, 43, of Phoenix, pleaded guilty in federal court to her involvement as coordinator of a human smuggling operation in Avondale, Arizona.

Co-conspirator Sergio Vazquez-Flores, 46, of Goodyear, Arizona, pleaded guilty to conspiracy on Nov. 5, 2021, after authorities charged him with operating a stash house in Avondale on behalf of Gonzalez-Lira.

“To anyone who’s anti-border and anti-wall, why is it only we are the bad guys?” Sam said on a recent Arizona border wall visit.

“What other nation has open borders as we do? If I cross the border into Mexico, I will get arrested and go to a Mexican prison. And they’re going to keep me there. And the [U.S.] State Department will have to argue to get me back and free me.

In the southern border town of Arivaca, Arizona, about 60 miles south of Casa Grande as the crow flies, citizens are known to conduct humanitarian operations, dispersing food and water to illegal aliens crossing into the United States through the Coronado National Forest and other points of entry.

Whether they know it or not, Sam said humanitarians assist the cartels and their human smugglers known as “coyotes” through the aid they provide.

“Usually, a lot of foot traffic is coming up to this point. Casa Grande is a hub for human and drug trafficking and disperses from here. It connects the I-8 and I-10. Those are two major highways to move product and people, and they have the Indian reservation here,” Sam says.

Some Arivaca residents seemed ambivalent as Sam and security specialist Kyle made a brief stop on their way to the border wall fence east of the town in a white Chevy Silverado equipped with thermal imaging equipment.

Outside the downtown general store, Kyle checked the electronic gear stored in the back of the truck.

Just then, a man in a white pickup rolled alongside, frowning.

“What are you doing?” he asked.

“Well, there’s nothing to survey here,” the man said, then drove off.

Further up the street, the La Gitana restaurant warned citizen border monitors to stay away.

“Unwanted. Members of any vigilante or border militia group including, but not limited to, AZ Border Recon. Do not enter our establishment. We have the right to refuse service to any person or persons we deem undesirable.”

Sam and Kyle dislike the term “vigilante.” Instead, they consider themselves patriotic citizens helping law enforcement to secure the border.

Kyle said they aren’t militia members, despite their thick beards and rugged appearance.

Sam said the company’s border work is “pro bono” to a large extent. He supports sane immigration laws—not only for the sake of U.S. citizens but also for the illegal aliens who face extreme hardship and even death in the desert. But he knows law enforcement is spread thin and can’t do it all alone.

Many illegal aliens arrive at the border fence as unaccompanied children—toddlers barely out of their diapers.

“You get a car [load] of six people—that’s over $10,000,” Sam said. “The people coming through this area don’t want to be caught. They’re the criminals; they’re the bad element.

“In Yuma, [Arizona,] they come across in big parties. They’ll come across the fence and sit down and wait for the Border Patrol to come.

“It’s usually family units,” he adds. “It’s the same in Sasabe [Arizona] and Arivaca. They have large groups of children, but they just come across the fence, sit down, and wait for Border Patrol to come and get them.”

Sam said many illegal aliens are children in groups of 30 or more, with only one adult to guide them across the border.

Once they cross over, they are less likely to be deported immediately.

Sam said high-speed chases with coyotes and their U.S. counterparts with police and Border Patrol are familiar sights near the border towns of Douglas and Nogales. However, most smuggling activity occurs along the border.

On the border wall fence opposite the town of Douglas sits the quaint Mexican city of Agua Prieta, Sonora. Here, cartel activity—murder and brutality—are daily events.

“[The cartels] recruit people from up north—younger people,” enticing Americans with money to transport illegal aliens once they cross into the United States, Sam said.

“The younger people take their parents’ cars and make their way” to Arizona from California.

He says illegal border crossings in Arizona are “just as bad—or worse—in some cases, depending on where you are,” as in Texas.

“Del Rio is the busiest sector in Texas, but Yuma is catching up and surpassing them,” he said.

From October 2021 to June 2022, the Border Patrol encountered more than 2 million illegal aliens at the U.S. southern border, apprehending 207,000 migrants in June alone. Illegal migrant deaths also hit a record 609 this year compared to 566 deaths in 2021.

Sam and Kyle said they’ve come across the bodies of migrants who died of heat exposure in desolate areas of Casa Grande.

According to U.S. Immigration and Customs Enforcement (ICE), human smuggling is an international business worth billions of dollars. It involves people seeking covert entry into the United States who “know they need to pay an organization for transport.”

The smugglers escort the illegal aliens across the border through the desert, then through stash houses to their final destinations in the United States.

“A portion of the smuggling fees paid to the transnational criminal organizations helps fuel their criminal enterprises,” ICE stated.

Sam said money is the main incentive the cartels use to recruit everyday U.S. citizens as de facto human smugglers.

“They use social media—Snapchat, Instagram, WhatsApp, Facebook Messenger—they use all these social media platforms to recruit people,” he said. “They operate in all states. All states in this country have representatives of the Sinaloa cartel.

“You think of the U.S. military having global reach, so does the Sinaloa cartel.”