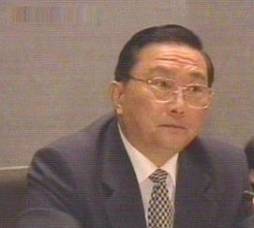 Luo Gan, head of the 6-10 Office. In recent years, Luo Gan has visited prisons in China to give secret orders, including the verbal directive that when a Falun Gong practitioner is beaten to death, it will be counted as a suicide. (zhuichaguoji.org)
China

Luo Gan, a member of the Chinese Government's Politburo Standing Committee, recently visited Argentina, Uruguay, and Cuba. On December 14, when Luo was in Argentina, Falun Gong practitioners protesting outside the Argentine parliament were attacked by a gang of Chinese men believed to have been hired by the Chinese Embassy. On December 16, the Falun Gong practitioners who were beaten submitted a lawsuit through their attorney Mr. Alejandro Cowes against the assailants and the Argentinean police who witnessed the beating but did not intervene.

On December 13, the day before the attack and while Luo was visiting Argentina, Falun Gong practitioners filed a lawsuit against him at the Federal Criminal Court in Buenos Aires. The beating and lawsuits drew international attention to Luo, the head of China's Gestapo.

Luo has kept a low profile to the outside world since becoming a member of the Politburo Standing Committee. Internally, however, he has tightly embraced his power and allowed no one to share it. Although Luo is the last of the nine Standing Committee members in ranking, he is actually the oldest, most experienced, and has been working in Zhongnanhai (the central government compound) longer than anyone except Wen Jiabao. His real power is much stronger than most of the members of the Standing Committee.

Zeng Qinghong has wanted to share Luo's power, but he has not had much success. Hu Jintao and Wen Jiabao are both “courteous” towards Luo, seemingly unwilling to get involved in Luo's business.

On the issue of the Tiananmen Square Massacre, the CCP leadership still does not dare to cross the line drawn by the previous administration of Jiang Zemin and Li Peng. Luo had a monopoly on how to suppress free speech and demonstrations during the three months before the June 4th Massacre, how to control political dissidents, and how to keep tabs on former CCP General Secretary Zhao Ziyang.

Luo Gan has built a national security “empire” no less so than Lavrenty Pavlovich Beria, the head of the KGB during Stalin's reign who killed numerous political enemies of Stalin.

Accomplice to the Tiananmen Square Massacre

Luo Gan was first given important powers during the Tiananmen Square Massacre. He insisted on cracking down on the student movement. At that time, there was much disagreement among the highest levels of the CCP leadership, and many officials opposed military suppression. Luo played an important role in the decision to open fire. On behalf of the Beijing CCP Commission, he also spread many lies about the students.

Zhang Liang, author of the book June Fourth: The True Story , said that during the Tiananmen Square Massacre, Luo Gan passed down and implemented many orders. Throughout the night of June 3 and the early morning of June 4, Luo personally gave orders at Zhongnanhai to supervise the armed police, the Ministry of Public Security, the Ministry of State Security, Xinhua News Agency, and the Broadcasting, Film, and Television Bureau. He also closely monitored the progress of the military as it entered Beijing and Tiananmen Square.

Luo also carefully forged footage of rioting students burning tanks and cars in order to provide justification for the massacre and to deceive the Chinese people.

On February 24, 2004, Dr. Jiang Yanyong from the People's Liberation Army's 301 Hospital, who was the whistleblower during the SARS epidemic, wrote a letter to the Politburo, the National People's Congress (NPC), the State Council, and the Chinese People's Political Consultative Conference (CPPCC), requesting that they redress the Tiananmen Square Massacre. This was just ten days before the meetings of the NPC and the CPPCC, when the political atmosphere was tense and the security was extremely high.

Dr. Jiang's letter broke the fearful silence on this issue and again touched the most sensitive nerves of the top CCP leadership. The central government at Zhongnanhai was shocked. After Luo received Dr. Jiang's letter, he personally visited Li Peng's office on the same day to report the letter. Li asked Luo to convey to Hu Jintao that he needed to order all CCP Central and State Council officials above the bureau level to watch the 3.5-hour video on the Tiananmen Square Massacre produced by the CCP under the direction of Jiang Zemin and Li Peng in the spring of 2001.

Under pressure from Li Peng and Jiang Zemin, the CCP Central General Office ordered all officials above the bureau level of all ministries under the CCP Central to watch the video within three months. The officials also had to state their position on the Tiananmen Square Massacre.

Luo paid particularly close attention to the Tiananmen Square Massacre because he was the only person in the top CCP leadership circle to have participated in every step of the decision-making related to the massacre. Fearful of a redress of the incident, he closely monitored the situation.

Arrest of the Tiananmen Mothers

On March 25, 2004, in Hong Kong, six Tiananmen Mothers led by Ding Zilin and Zhang Xianling submitted video testimony to the United Nations Human Rights Commission. In her testimony, Ms. Ding said that from the moment her son died, she had always felt that being alive was worse than death. However, in the end, she chose to live. “After I chose to live, I also chose to break the silence, which had become the cause of the CCP's monitoring and surveillance.” Through the process of losing her son, being monitored by the CCP, and searching for family members of other victims, Ms. Ding “finally saw the CCP's true face and understood the evilness of the system.” She has since publicly appealed to the international community to assist in finding the people who were missing after the Tiananmen Square Massacre.

Luo was infuriated after reading the testimony. He wrote a long order to Xu Yongyue, Minister of State Security, asking Xu and the state security system to closely monitor Ding. On the afternoon of March 28, during the UN Human Rights Commission meeting in Geneva, the state security system in Wuxi and Beijing arrested Ding Zilin, Zhang Xianling, and Huang Jinping, three family members of victims of the Tiananmen Square Massacre. The reason for the arrests was that they had “illegally shipped T-shirts from Hong Kong.”

The arrests prompted strong protests inside and outside of China. Facing pressure from the public and the media, Hu Jintao inquired about the arrests and requested that the state security system release the three women. After five days of detention, the women were released.

Beijing-based home church leader Cai Zuohua was arrested on September 11, 2004 for publishing religious books, including the Bible. His wife Xiao Yunfei, Xiao's brother Xiao Gaowen, and sister-in-law Hu Jinyun were arrested on September 27 in Hunan Province. On November 8, Beijing Haidian District Court sentenced Cai to three years in prison and 200,000 yuan (US$25,000) in fines for running an “illegal commercial operation.” Ms. Xiao Yunfei was sentenced to two years and 150,000 yuan (US$18,750) in fines. Mr. Xiao Gaowen was sentenced to 18 months in prison and 100,000 yuan (US$12,500) in fines.

According to Fu Xiqiu, a former instructor at the Beijing Municipal Party School and a pastor of a home church, Luo was personally involved in the Cai case and insisted that Cai be punished severely.

From November 5 to November 6, 2004, peasants from Hanyuan County, Sichuan Province were dissatisfied with the government's seizure of farmland to build a power plant dam without just compensation, and staged a protest to stop the damming of the river. Luo flew to Sichuan in person to direct the suppression. As soon as he arrived in Sichuan, he called an emergency meeting and ordered the use of violence.

That evening, five paramilitary police vans from Chengdu City arrived in the county seat of Hanyuan and shot smoke bombs and tear gas bombs at the peasants. The smoke bombs killed an elderly woman and injured dozens. At 11 a.m. on November 6, about two hundred buses and military vehicles full of paramilitary policemen arrived in the county seat; the police arrested many people. The peasants didn't dare leave their homes. The paramilitary police also shot at unarmed peasants. A woman in her 50s was killed. By midnight on November 6, preliminary reports indicated that 17 peasants were killed and more than 40 were injured. Reporters on their way to Hanyuan were stopped more than 62 miles away and sent back.