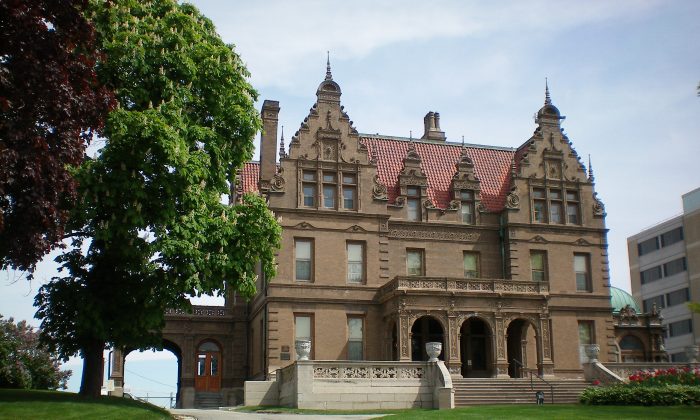 The Pabst Mansion, built in 1892 by beer tycoon Frederick Pabst, was once considered the jewel of Grand Avenue, Milwaukee's famous avenue of mansions. With over 60 residences, the avenue was heralded one of the finest residential streets in America. (Courtesy of visitmilwaukee)
Opinion

Lunch With the One Percent

They might be better than popular culture says they are

I drove deeper and deeper into the hardcore, 1 percenter, mansion zone. The weather was unsettled, with a menacing slate gray sky on one side and a blue sky with fluffy cumulus clouds on the other. The houses became larger, and the curbs more manicured. On one side of the street, a wrought iron arch covered a granite driveway. It sported a shield and lions and crossed swords. On the other side, a cluster of blue and white and yellow and pink balloons adorned a mailbox. That marked my spot.

We were celebrating a 90th birthday. I did not expect to know many people beyond the honored nonagenarian matriarch and grandmother of four. I did think they would mostly be members of the 1 percent. That is defined as households with annual incomes of $383,001 and above, an oddly specific amount, but hey, math.

At first I clung to my sister, until the guest of honor told us to stop. Then I worked the room.

I met warm, smart, thoughtful, accomplished women. One entered in sensible shoes, which she caught under an oriental rug. I squared off, ready to break her fall. My rescue impulse led us to chat.

This lady, a generation above me, earned a law degree, practiced law at a silk stocking firm, and raised five, count them, five children. I mention the generations because they used to not welcome the ladies in law schools and law firms. She pioneered—and she did not tell me any of that. Humble.

Her friends told me. One said I would not believe how many community boards she serves on, and how much charitable work she does. In her 80s, she is working for her community.

She and I talked about the value of conserving green spaces and how people from both parties agree that they want parks and public land. We talked about the great landscape architect Frederick Law Olmstead, and about the parks he designed for Atlanta. We talked books. Her green eyes shone with a kindly intelligence.

The head of ‘Evil Corporation’ has a luscious, plummy voice and a heart as cold as the original Ice Queen, not the Disney one.

I’ve been watching the original and bold TV show “Mr. Robot.” It’s about hackers who want to bring down the global economic system, and the central character is most intriguingly insane. It’s a good drama, with nods to Anonymous and to the youth who fomented the Arab Spring. Its worst villains are corporate executives. Second worst are drug dealers, and I can support that, but I can’t support demonizing the executives.

A lot of business leaders and top professionals became leaders because they are good. By good I mean not only capable, but virtuous.

Our popular culture would have it that executives are all like the louts and chiselers who ran Enron. But Enron fell apart. There was jail time involved. Bad character makes for an unstable success, if it allows success at all.

In “Mr. Robot,” the head of “Evil Corporation” or E Corp., has a luscious, plummy voice and a heart as cold as the original Ice Queen, not the Disney one. Pretty much everybody in a suit is up to no good. One corporate couple in the story makes Mr. and Mrs. Macbeth look like Ward and June Cleaver. The Macbeths went the Enron route too, remember—a short-lived success.

Our culture has lost sight of this. It’s all House of Cards and Game of Thrones. There is nothing to look up to. It’s a mistake.

The ancient Chinese had a nearly infinite trove of stories about virtue being rewarded. A student passes the imperial exam because he stopped on the road to help a weeping widow. The emperor promotes a government official because he prevented an unjust execution, and accepted no thanks or reward. People keep promises, sacrifice themselves for others, tell the truth, and show compassion. Those people prosper afterward.

In these ancient tales, often the stories themselves are what make people turn good. They see what virtue is and they aspire to improve. That makes their communities better. Justice reigns. Peace follows. Right now in the modern world, we need better stories.

We need to stop being so cynical about our 1 percent people. Some of them are what the English would have called gentles or nobles.

Because I think it’s still true that what goes around comes around. That’s American for virtue is rewarded.