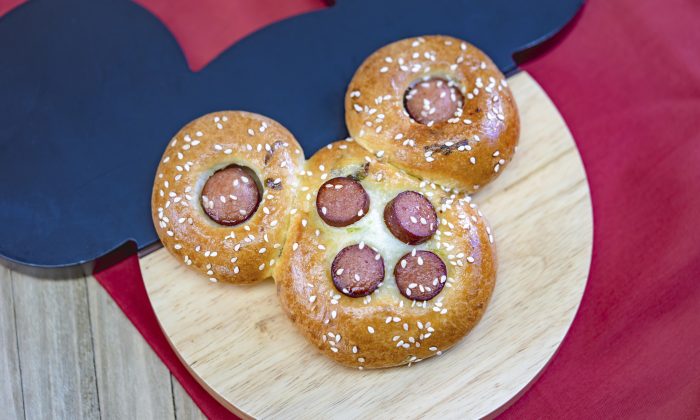 As Asian-Americans across the United States marked the Lunar New Year on Feb. 5, they could celebrate by eating Mickey Mouse-shaped tofu, sporting a pair of Year of the Pig-inspired Nike shoes, or by snacking on pricey cupcakes.

The delicacies and traditions that once made a generation of Asian-Americans feel foreign are now fodder for merchandizing. Between now and Feb. 17, Disney California Adventure Park is offering “Asian eats” that include Mickey-shaped tofu and purple yam macaroons.

Nike issued a limited-edition Chinese New Year collection of shoes with traditional Chinese patchwork. Housewares giant Williams Sonoma has a slew of Lunar New Year dishware, and its website offers a set of nine “Year of the Pig” cupcakes for $80.

Robert Passikoff, a marketing consultant and founder of Brand Keys Inc., said there’s been a “reawakening” in the last few years of the United States’ world view of China. But it’s also about differentiating your business and growing revenue, not necessarily inclusion.

“They’re not there as social workers to create harmony among the disenfranchised people,” Passikoff said. “The other side is brands are all looking for an itch, they’re all looking for some way to engage customers. And if the Lunar New Year will do it, why not?”

“Crazy Rich Asians” cast member Harry Shum Jr. promoted the exhibit and brushed off those who may scoff at the company’s efforts.

“I think it’s good to be reminded of these traditions. It’s been so important for many generations before us to try [to] pass that on and also experience it in a new way,” Shum said.

Andrea Cherng, the Panda Restaurant Group’s chief marketing officer and the daughter of Chinese-American founders Andrew and Peggy Cherng, said she knows some Asian-Americans will roll their eyes.

“Now the reality about Panda is that we were many people’s first Chinese experience in the U.S.,” Cherng said. “But then what a fantastic opportunity for us to be able to bridge cultures and bring to them our interpretation of what’s so special about this holiday.”

Christopher Tai, 37, of San Francisco, recently bought a Golden State Warriors jersey specially made for the Lunar New Year as a gift for his girlfriend’s father. The design includes the Chinese character for “warrior.” He said the jersey shows an effort at inclusion.

“They’re recognizing an underrepresented part of their fan base,” Tai said.

But he wonders if shoppers who snap up Williams Sonoma dishware will come away learning anything.

“I feel like a lot of people are attracted to these aesthetic elements like say red, dragons, dogs, or shiny gold, without really knowing the significance of the colors and symbols and what the animals mean,” Tai said.

“There’s a part of me that’s still that kid who felt my culture was very ‘other.’ From that standpoint, I’m happy to see it more mainstream,” said Lisa Hsia, 37, of Oakland, California. “But at the same time when I see Chinese New Year shoes or whatever, I have to ask, ‘Who’s putting this together and who’s it for?’ ”

Most Chinese traditionally ring in the Lunar New Year, which is assigned one of 12 animals each year off the Chinese zodiac, with a family dinner the evening before. The meals typically include a whole chicken, a whole fish, pork, noodles, spring rolls and dumplings, whose shape resembles ancient Chinese gold ingot currency.

Other customs include giving money-filled red envelopes to children or single young adults and sharing mandarin oranges, which represent good fortune. The celebrations, which are also commemorated in Vietnam and other countries with ethnic Chinese communities, can last up to two weeks.

As Asian populations in the United States and social media use grow, it’s easier for people to be aware of the holiday and its customs.

Xi Chen, who is from China but teaches Mandarin to middle-schoolers in Hamilton, Massachusetts, incorporated dumpling-making as part of her Lunar New Year lesson.

“We don’t have many Asian restaurants in town. Some students told me it was the first time in their life they’ve tried dumplings,” Chen said.