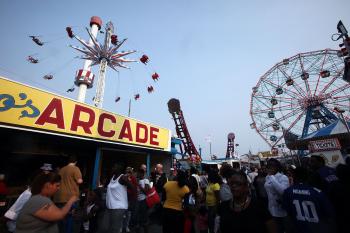 The first new amusement park, Luna Park, opened up in Coney Island on Friday, after being dormant for a half a century. The new development will more than double the size of the amusement area. Only 12 rides are open during its inception weekend, but another seven rides will be opened in the near future.

“Decades of disinvestment and neglect allowed the amusement district to shrink to a shell of its former glory,” said Mayor Bloomberg. “Today, we’re reversing that trend.”

The amusement park will retain an open format, in which customers pay $3 to $5 for a single ride, rather than having to pay once to get into the entire park. However, patrons can purchase an unlimited ride wristband for $26 Monday through Friday, or for $30 on weekends.