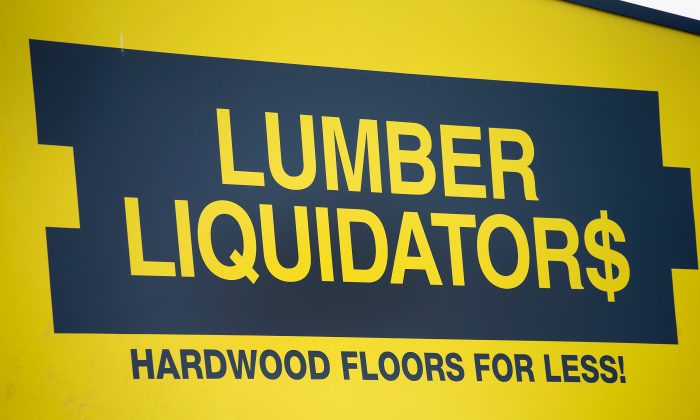 A sign marks the location of a Lumber Liquidators store on April 29, 2015 in Cicero, Illinois. (Scott Olson/Getty Images)
Business & Markets

NEW YORK—Lumber Liquidators Holdings Inc. named a new CEO as it continues to struggle with sales in the wake of allegations that imported Chinese-made laminate flooring contained high levels of the carcinogen formaldehyde.

The Toano, Virginia-based company suspended the sale of all such products made in China this spring, but the CEO Robert Lynch resigned in May. He was replaced temporarily by the company’s founder, Thomas D. Sullivan, as acting CEO.

Sullivan is now being replaced as CEO by board Chairman John M. Presley, who joined the board in April 2006. The company says he has held numerous roles in top executive positions at other companies, including First Capital Bancorp.

Nancy M. Taylor, who has been a board member since April 2014, was named to as board chairman.

Presley will continue to serve as a member of the board.

The hardwood floors retailer is still struggling to regain its position following the China scandal. During the third-quarter, it swung to a loss of $8.5 million, or 31 cents per share, after reporting a profit in the same period a year earlier. The results missed Wall Street expectations. The average estimate of 10 analysts surveyed by Zacks Investment Research was for a loss of 21 cents per share.

Lumber Liquidators woes began in March, when the CBS news show “60 Minutes” first reported that Chinese-made laminate flooring being sold by the company contained high levels of formaldehyde. The company initially sent air testing kits to customers and said the results showed the majority of the products fell within World Health Organization guidelines. But, in spring it stopped buying the products from China and opted for products from Europe and North America.

The company fired chief merchandising officer William Schlegel in June, but did not say whether it was connected to the issue in China. It named Marco Pescara, who has been with the company for nine years, to the position.

More recently, the company agreed to pay $13.2 million and plead guilty to violations of environmental law that involved the importation of illegally sourced wood products. That issue is not connected to the controversy over Chinese-made products.

Lumber Liquidators shares fell 2 cents to $14.20 in premarket trading Wednesday. It shares have fallen 79 percent since the beginning of the year. The stock has decreased 74 percent in the last 12 months.