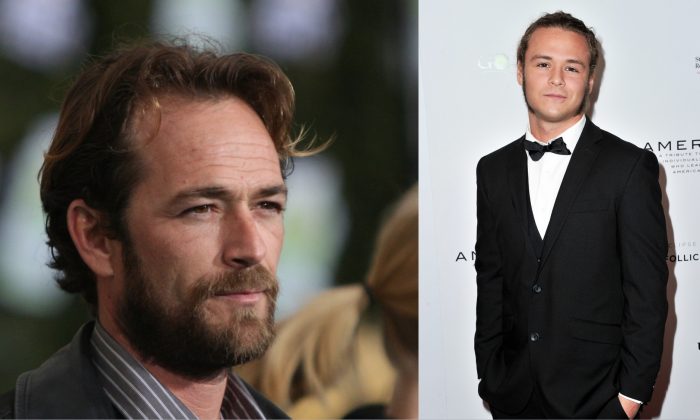 Luke Perry’s son paid tribute to his late father’s final acting role by climbing on top of the film’s billboard on the day of its Los Angeles premiere.

Perry died in March at the age of 52 after suffering a stroke.

His final movie role was in Quentin Tarantino’s ninth feature film titled “Once Upon a Time in Hollywood.” In the film, Perry’s character has a run-in with one played by Leonardo DiCaprio.

In a touching video tribute posted on July 22 on his Instagram account, Perry’s 22-year-old son Jack walked up to the billboard on Hollywood’s Sunset Blvd and jumped onto its ledge.

A professional wrestler who goes by the stage name Jungle Boy, Jack then climbed on top of the billboard and sat on its edge, striking a pensive pose.

“Big premiere tonight. He deserved this, and I’m very proud of it,” Jack captioned the post. “A stud in life, and forever after. The best of the best. Love you forever. Thanks @dannydrone_ for capturing and making this for me.”

Big premiere tonight. He deserved this, and I’m very proud of it. A stud in life, and forever after. The best of the best. Love you forever. Thanks @dannydrone_ for capturing and making this for me.

“Such an emotional picture JP,” Ziering wrote. “You being in it brings water to my eyes.”

Quentin Tarantino was asked to comment on Jack’s tribute at the film’s premiere later that day.

“It’s fantastic, it moved me so much,” Tarantino told ET. “Luke’s son actually worked on the movie. He wanted to work on the film, so he worked as a PA and he worked as an extra on a couple of scenes, so I know he had a wonderful experience on the movie. But he looked so [expletive] up there on that billboard, and it was such a lovely tribute to his father.”

He was so proud of this, and so am I. Always a stud.

Set in 1969 Los Angeles, the movie “Once Upon a Time in Hollywood” is about fading television actor Rick Dalton, played by Leonardo DiCaprio, and his former stuntman Cliff Booth, played by Brad Pitt, as Dalton struggles to make it on the big screen.

Besides his son, Perry also left behind a 19-year-old daughter, Sophie, at the time of his death.

His death was announced on his official Facebook page. “Peter succumbed to a 10 year bout with adenoid cystic carcinoma, a rare cancer of the salivary glands,” the statement read.