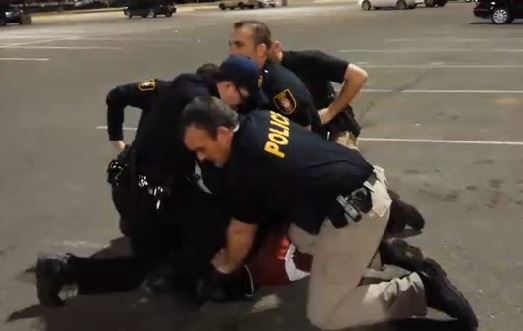 Luis Rodriguez Dies After Getting Pinned by Cops in Oklahoma

Luis Rodriguez, a Moore, Oklahoma resident, was pinned by police officers outside of a movie theater.

Three police officers and two security officers responded to a call about a domestic disturbance.

Nair Rodriguez, Luis’ wife, got into an argument with her 19-year-old daughter, and hit her.

Luis is shoved to the ground by the officers, with one holding his head and the others on top of him as they handcuff him.

As Nair is explaining what happened on video, she turns around and asks if her husband is okay, because he’s not moving.

She then says police killed her husband and asks someone to tell her that he is okay.

Michael Brooks-Jiménez, the family’s attorney, said it’s not clear why police took Luis down because the argument was between Nair and her daughter.

The five officers knocked him unconscious and may have killed him, the lawyer said.

Autopsy results are pending and the three police officers are on administrative leave at the moment.

Kyle Eastridge, a former homicide investigator and current private investigator, told KFOR that all of the officers were out of breath.

Watching the video of the scene, he said that the officers were not using excessive force.

“This is pretty benign as far as police procedure goes. Everything is textbook. I don’t know what happened before.”

About the officer who had his knee on Luis’ back, Eastridge said: “He’s not really bearing down on him. He’s just trying to keep him down.”

Eastridge and another private investigator say that based on the video, Rodriguez was likely alive when he was loaded into the ambulance.

Jeremy Lewis, a police investigator, told Fox that “”We do stand behind our officers and their actions.”

The Oklahoma State Bureau of Investigation is investigating.

Luis was detained because he didn’t have his identification on him. It’s still unclear why he was detained as opposed to his wife.

Jiménez, the lawyer, said: “Luis committed no crime. He was not armed. He had no gun, no knife, no weapon of any kind. But Luis is the one who lost his life that night.”