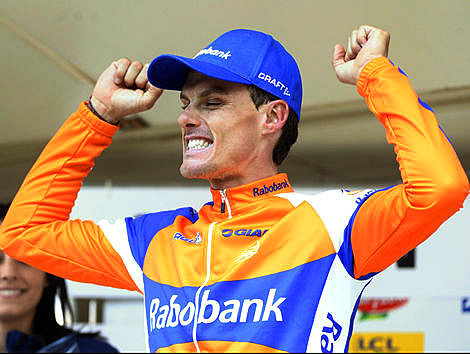 Luis Leon Sanchez exults on the podium after winning Stage Six of the Tour of Romandie. (rabosport.com)
Cycling

Luis Leon Sanchez earned a stage win for Rabobank in Stage Three of the Tour of Romandie, a very hilly stage with a long uphill finish that set up a bunch sprint between climbers. Sanchez beat Lotto’s Gianni Meersman across the line by a few centimeters, taking the stage and a ten-second time bonus.

“Even after that tough luck in the first stage when I couldn’t join in the sprint because of a broken spoke, the team kept on working for me,” Sanchez told velonation.com. “Today everything worked out well.

“The team was really strong again and there was no bad luck in the sprint,” he explained. “It was definitely very hard and very close, but I am glad that I could clinch it for the guys and the hard work they did.”

Bradley Wiggins held onto the leader’s jersey, but just—he wasn’t able to contest the sprint and didn’t get any time bonuses, while Luis Leon Sanchez did for the second day in a row. Wiggins has a single second’s lead over the Rabobank rider, with the race’s hardest stage on the horizon.

Stage Four, 184 km from Bulle to Sion, should sort out the real climbers. With A Cat 1 climb 30 km in and a Cat 2 and two Cat 1s in the final sixty km, this stage might give Wiggins some breathing room for Sunday’s time trial.