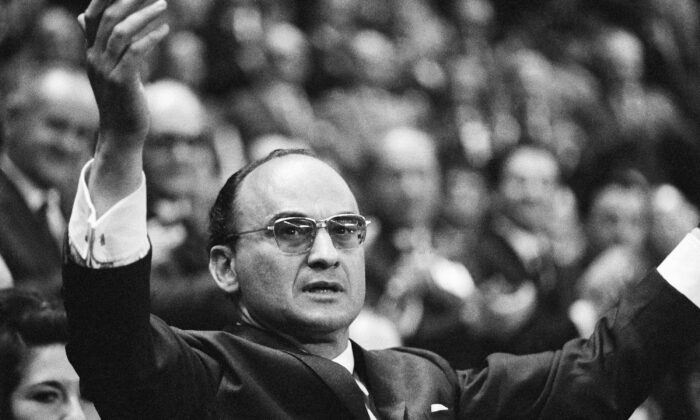 Luis Echeverria Alvarez speaks to party members after becoming the official nominee for the 1970-76 presidential race, during the closing session of the ruling Institutional Revolutionary Party's conventional at the Olympic Sports Palace in Mexico City on Nov. 16, 1969. (AP Photo)
World

MEXICO CITY—Former Mexican President Luis Echeverria, who tried to cast himself as a progressive world leader but was blamed for some of Mexico’s worst political killings of the 20th century, has died at the age of 100.

Current President Andrés Manuel López Obrador confirmed the death Saturday on his Twitter account and sent condolences to Echeverria’s family and friends “in the name of the government of Mexico,” but did not express any personal sadness about the death.

López Obrador did not provide a cause of death for Echeverria, who governed Mexico from 1970 to 1976. He had been hospitalized for pulmonary problems in 2018 and also had neurological difficulties in recent years.

Echeverria positioned himself as a left-leaning maverick allied with Third World causes during his presidency, but his role in the notorious massacres of leftist students in 1968 and 1971 made him hated by Mexican leftists, who for decades tried unsuccessfully to have him put on trial.

In 2004, he became the first former Mexican head of state formally accused of criminal wrongdoing. Prosecutors linked Echeverria to the country’s so-called “dirty war” in which hundreds of leftist activists and members of fringe guerrilla groups were imprisoned, killed, or simply disappeared without a trace.

Special prosecutor Ignacio Carrillo asked a judge to issue an arrest warrant against Echeverria on genocide charges in the two student massacres, the first of which occurred when served as interior secretary, overseeing domestic security affairs.

On Oct. 2 1968, a few weeks before the Summer Olympics in Mexico City, government sharpshooters opened fire on student protesters in the Tlatelolco plaza, followed by soldiers posted there. Estimates of the dead have ranged from 25 to more than 300. Echeverria had denied any participation in the attacks.

According to military reports, at least 360 government snipers were placed on buildings surrounding the protesters.

In June 1971, during Echeverria’s own term as president, students set out from a teacher’s college just west of the city center for one of the first large-scale protests since the Tlatelolco massacre. They didn’t get more than a few blocks before they were set upon by plainclothes thugs who were actually government agents known as the “Halcones,” or “Falcons.” Prosecutors say that group that participated in the beating or shooting deaths of 12 people.

That attack was depicted in the Oscar-winning 2018 movie “Roma,” in which two characters stumble across the violence, which turns out to involve one of their boyfriends as a member of the Halcones.

In 2005, a judge ruled Echeverria could not be tried on genocide charges stemming from the 1971 killings, saying that while Echeverria may have been responsible for homicide, the statute of limitations for that crime expired in 1985.

In March 2009, a federal court upheld a lower court’s ruling that Echeverria did not have to face genocide charges for his alleged involvement in the 1968 student massacre, and ordered his release, though opponents noted the case against him was never closed.

Echeverria never spent a day in jail, though he was under a form of house arrest for some time.

While few people in Mexico mourned the passing of Echeverria, Félix Hernández Gamundi—a 1968 student movement leader who was in Tlatelolco plaza on the day of the massacre, and who saw his friends gunned down—mourned what might have been.

“The death of ex-President Luis Echeverría is regrettable because it occurred in total silence, because despite his very long life, Luis Echeverria never decided to come clean about his actions,” Hernández Gamundi said.

“Of course we don’t mourn his death,” he said. “We mourn the opacity he displayed his entire life and his decision never to make an accounting, to always take advantage of his immense political and economic power that he enjoyed for the rest of his life.”

“He delayed for a long time the inevitable process of democracy that began in 1968,” Hernández Gamundi said, referring to the fact that the massacre became a catalyst for activists trying to end a system of one-party presidential rule. “October 2 marked the beginning of the end of the old regime, but it took many years afterward.”

Echeverria’s death came at a time that his Institutional Revolutionary Party, or PRI—which ruled Mexico with an iron hand for seven decades, before losing power for the first time in the elections of 2000—is losing what little power it still had, discredited and riven by internal scandals and disputes.

“Things could have been different,” he said. “The PRI had a lot of opportunities to put things right and make an accounting.”

Shortly afterward, he began his political career with PRI. He later held posts in the navy and Education Department, advanced to chief administrative officer of the PRI and organized the presidential campaign of Adolfo Lopez Mateos, who was Mexico’s leader from 1958–64.

In 1964, under then-President Gustavo Diaz Ordaz, Echeverria was rewarded with the key position of interior secretary, overseeing domestic security. He held that position in 1968, when the government cracked down on student pro-democracy protests, apparently worried they would embarrass Mexico as the host of the Olympics that year.

Echeverria left the interior post in November 1969, when he became the PRI’s presidential candidate.

He won that race, and was sworn in on Dec. 1, 1970, and supported the regimes of Cuba’s communist Fidel Castro and Marxist Salvador Allende in Chile.

After Allende was assassinated in 1973 during a coup led by Gen. Augusto Pinochet, Echeverria opened Mexico’s borders to Chileans fleeing Pinochet’s dictatorship.

Domestically, Echeverria presided over boom times in Mexico in the 1970s linked to a bonanza in oil prices and oil discoveries. He vastly expanded the number of government-owned industries, a policy his successors later had to reverse because his ambitious public spending and building programs left Mexico deeply mired in debt.

Seeking to shed his repressive image, Echeverria wore the loose, open-necked tropical shirt known as the “guayabera” and he later pardoned many of the student leaders jailed during the crackdown on protests in 1968. He actively sought to recruit intellectuals with government jobs and money.

Echeverria traveled the world promoting himself as a leader of the third world and friend of leftist causes. But within Mexico, he couldn’t shake his reputation for cracking down on dissent.

According to Carrillo, the prosecutor who tried to charge him, Echeverria “was the master of illusion, the magician of deceit.”

Juan Velásquez, the lawyer who defended Echeverria, said the ex-president died at one of his homes, but did not specify a cause.

“I told Luis that even though nobody—not him, not me, not his family—wanted him to go on trial, in the end it was the best thing that could have happened,” because the charges were dropped, Velásquez said.

In his later years, Echeverria tried to project himself as an elder statesman, and a few times—when his health permitted—held forth unrepentantly before journalists. But he mainly lived in reclusive retirement at his sprawling home in an upscale Mexico City neighborhood.