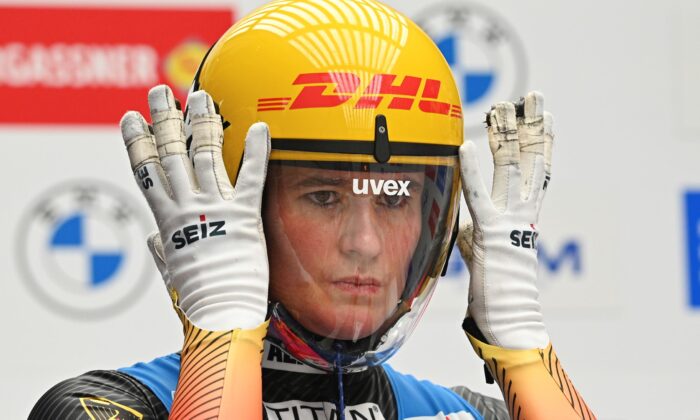 Natalie Geisenberger of Germany prepares to compete in the women's competition at the Luge World Cup in Sochi, Russia, on Dec. 5, 2021. (Ekaterina Lyzlova/AP Photo)
Chinese Regime

ALTENBERG, Germany—Natalie Geisenberger of Germany, the two-time defending women’s Olympic luge champion, is considering skipping the Beijing Games because of her dissatisfaction with the way athletes were treated by Chinese officials when training there earlier this season.

Geisenberger made the revelation Wednesday in an interview with German regional broadcaster BR.

It would be a massive void in the women’s Olympic luge field if Geisenberger does not attend. She generally is considered the greatest women’s luge athlete ever, has a total of four Olympic golds—two individual, two team—and her 50 World Cup singles wins are by far the most in the sport’s history.

She hasn’t made a final decision, and Germany is not expected to announce its Olympic team until the first weekend of January.

“The conditions that we experienced there speak in favor of not necessarily going back there again,” Geisenberger told BR.

She is racing this weekend in a World Cup race in Altenberg, Germany.

Geisenberger spent several days in quarantine after arriving in China for a three-week training and racing period in November. She got there on a charter flight that carried basically the entire International Luge Federation circuit to China for those events, then wound up being among the sliders identified as a potential close contact to someone who was aboard that flight and tested positive for COVID-19.

Despite testing negative daily, Geisenberger said rules put in place by Chinese officials mandated that she would not be allowed out of her room for several days other than for training sessions. She said food dropped off outside her door wasn’t to the standard that elite athletes need or want. Conditions improved slightly after she complained to FIL officials and asked why athletes were not treated better, she said.

The only reason Geisenberger hasn’t ruled out a return to China is the lure of the Olympics. If she competes, she’ll have a chance of matching German Georg Hackl’s feat of three consecutive singles Olympic golds.

“With these experiences, definitely not for a World Cup or world championships,” Geisenberger said. “And, I simply have to say, I’m thinking it over about the Olympics … whether I would do that to myself again.

Germany is the most dominant luge country in the world. Two-time Olympic men’s champion Felix Loch has said he’s not considering a boycott, though his father—German national team coach Norbert Loch—said he also wants better conditions.

“My demand is that the IOC regulates in its leadership how the athletes are dealt with,” Norbert Loch told German reporters Wednesday.

Geisenberger is the reigning World Cup overall champion, reclaiming her crown last season after sitting out the 2019–20 season while pregnant with her son. She is only seventh in this season’s overall standings, in large part because she finished 26th in the season-opening race in China. Geisenberger crashed in her first run of that two-run race, an unenjoyable end to an unenjoyable stay in China.

With the exception of the season she sat out, Geisenberger has been in the top three of the World Cup standings in 13 consecutive seasons. She was third in 2007–08, finished second in each of the next four seasons, and then began her title streak in 2012–13.

“It would be a very, very hard step because the Olympic Games are the biggest thing for an athlete,” Geisenberger told BR.