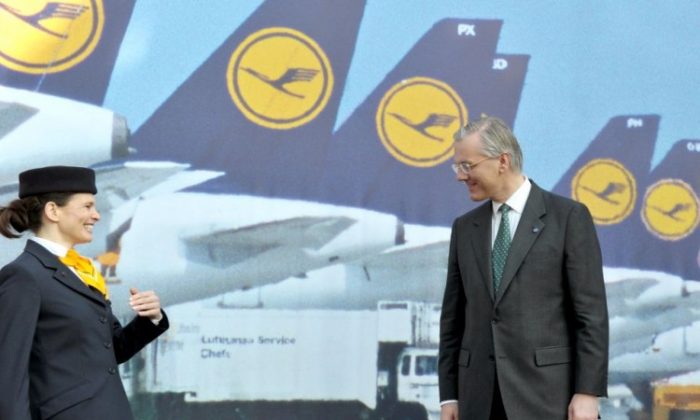 FRANKFURT—Lufthansa AG, the biggest German airline, has warned that its total profits will experience another dip in 2012, following a loss of 13 million euros ($17 million) in 2011.

It still forecasts an operating profit of “mid three-figure million euro range” in this year, compared to 820 million euro operational profit in 2011.

The company blames the ongoing European debt crisis, high fuel costs, and fierce competition for the negative profits. Besides external conditions, Lufthansa is in the process of selling its underperforming UK subsidiary BMI British Midland that was also a major factor contributing to the losses last year.

Although Lufthansa posted a loss, it still paid out 25 cents in dividends per share last year in order to keep investors rewarded from the company’s operating profit.

Christoph Franz, the CEO of Lufthansa, proposed a new cost savings program called SCORE and promised higher ticket prices for passengers. SCORE program aims to improve the company’s profit by 1.5 billion euros by 2014. Among some of its contents is a 25 percent total cost cut, out of which 80 percent will be related to salaries and wages. Lufthansa will start a hiring freeze and could also possibly cut some of its 117,000 employees worldwide.

“It is going to be hard work, because in order to structurally and sustainably strengthen the group’s earnings power, we are going to have to rebuild the group itself and we have to be willing to make some unpopular decisions,” said Chief Executive Christoph Franz at a press conference last week.

There are also rumors that Lufthansa plans to sell its subsidiary Austrian Airlines.

Lufthansa has also suffered under a new law that bans night flights in the Frankfurt area—Germany’s financial capital and the biggest hub for the airline.

“That is not only problematic for our cargo flights, but also has a big impact on our passenger flights,” said Mr. Franz in disapproval of the night flight ban. The night flight ban was an initiative by people living around Frankfurt area that complained about the high noise levels of the busiest airport in Germany. The German court ruled that people around Frankfurt area need “few hours of quiet during the night.”

In the next six years, Lufthansa plans to increase its fleet size by adding 170 new airplanes worth of 17 billion euros—the largest investment ever for the German air carrier. Besides buying new airplanes, the company plans to upgrade its airport lounges and modernize its existing utilities.

At the moment, Lufthansa consists of 13 subsidiary companies or partly owned airlines, including Austrian Airlines, Brussel Airlines, Germanwings, JetBlue Airways, among others. It has its headquarters in Cologne, but most of its staff operates and lives around Frankfurt area, which has the biggest airport in Germany.