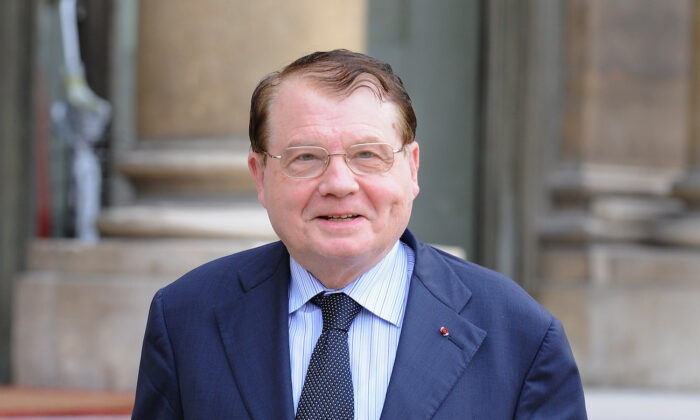 Luc Montagnier, a Nobel Prize-winning virologist who discovered HIV and a critic of COVID-19 vaccine mandates, has died at the age of 89.

The professor died at the American Hospital of Paris, in Neuilly-sur-Seine, France, “surrounded by his children,” reported French outlet FranceSoir on Feb. 9. The death was later confirmed by the area’s city hall. No information about the cause of death was released.

French President Emmanuel Macron paid tribute in a written statement on Feb. 10 to Montagnier’s “major contribution” to the fight against AIDS and expressed condolences to his family.

Montagnier is best known for having been awarded the 2008 Nobel Prize in Physiology or Medicine for having discovered the human immunodeficiency virus (HIV) in 1983. Montagnier shares half of the award with colleague Francoise Barré-Sinoussi—the two led a working group at the Pasteur Institute in Paris that isolated the virus.

The other half of the 2008 Nobel Prize in Physiology or Medicine was awarded to German cancer researcher Harald zur Hausen for having discovered the role of papilloma viruses.

American scientist Robert Gallo had claimed to have found the same virus at almost exactly the same time as Montagnier, sparking a disagreement over who should get the credit. The two scientists ultimately agreed in 1987 that Montagnier had isolated the virus, while Gallo had established HIV’s link to AIDS and had created the first HIV blood test.

HIV attacks the body’s immune system and can, but not always, lead to acquired immunodeficiency syndrome (AIDS) if not treated. AIDS treatments became widely available in 1997, enabling HIV patients to live near-normal lives.

Montagnier was born in 1932 in France and studied medicine in Poitiers and Paris. He gained a Ph.D. in virology at the University of Paris. In 1960, he joined the French National Centre for Scientific Research (CNRS), one of Europe’s largest scientific agencies, where he served as director of research from 1974 to 1998. In 1972, Montagnier joined the Pasteur Institute and became the founding director of its viral oncology department until 2000.

Throughout his career, he worked in a variety of research and teaching positions at the Pasteur Institute, the CNRS, the Shanghai Jiao Tong University in China, and the Queens College in New York.

Prior to the onset of the AIDS epidemic in the 1980s, Montagnier had made significant discoveries concerning the nature of viruses and contributed to the understanding of how viruses can alter the genetic information of host organisms. His investigation of interferon, one of the body’s defenses against viruses, also opened avenues for medical cures for viral diseases.

In 1993, he became the President of the World Foundation for AIDS Research and Prevention, which he founded with Federico Mayor, former General Director of UNESCO, in the same year.

Montagnier was a recipient of dozens of awards, including France’s highest decoration, the Legion of Honor. He also had 13 honorary doctorate degrees.

Over the past two years, Montagnier made headlines over his various statements regarding COVID-19 or the COVID-19 vaccines.

In April 2020, the prominent virologist said that the genome sequence of SARS-CoV-2, also known as the CCP (Chinese Communist Party) virus, appeared to be man-made as a part of HIV vaccine research, and appeared to have accidentally escaped from a laboratory in Wuhan.

In a separate interview the same month with French news channel CNews, he said that sequences of HIV were found in the virus, citing a since-retracted paper by Indian scientists in January 2020 that had not been peer-reviewed. The paper garnered controversy, with some experts saying the SARS-CoV-2 genome sequence has no HIV-1 sequences.

Months later, in May 2021, Republican members of the House Intelligence Committee issued a report that stated, “There is overwhelming circumstantial evidence … to support a lab leak as the origination of COVID-19.” By July 2021, World Health Organization (WHO) Director-General Tedros Adhanom Ghebreyesus said was “premature” to rule out the possibility that the virus could have emerged from a lab in Wuhan, China, without sufficient evidence.

In May 2021, prior to the emergence of the Delta variant, Montagnier expressed his concerns over sweeping COVID-19 vaccine mandates that were being imposed in many countries and in various industries around the world.

When asked about his views toward mass vaccination against COVID-19 compared to other treatments, Montagnier said at the time, according to a translation provided by the RAIR Foundation USA: “It’s an enormous mistake, isn’t it? A scientific error as well as a medical error. It is an unacceptable mistake. The history books will show that, because it is the vaccination that is creating the variants.”

“For the China virus, there are antibodies created by the vaccine. What does the virus do? Does it die or find another solution?” he continued. “The new variants are a production and result from the vaccination. You see it in each country, it’s the same: the curve of vaccination is followed by the curve of deaths.

“I’m following this closely and I am doing experiments at the Institute with patients who became sick with Corona after being vaccinated. I will show you that they are creating the variants that are resistant to the vaccine.”

In an opinion piece Montagnier co-authored with former Yale law professor Jed Rubenfeld, published in the Wall Street Journal on Jan. 9, the two wrote that there is no evidence that COVID-19 vaccines have prevented infections by the Omicron variant, and as such, it would be “irrational, legally indefensible and contrary to the public interest” for the U.S. government to mandate the shots.

“[M]andating a vaccine to stop the spread of a disease requires evidence that the vaccines will prevent infection or transmission (rather than efficacy against severe outcomes like hospitalization or death),” they wrote.

They also said that “the little data we have” suggest that the mRNA-based vaccines do not prevent transmission, pointing to a preprint study that found that vaccines from companies Pfizer and Moderna “no longer had any statistically significant positive effect against Omicron infection” after 30 days, and the effect “went negative” after 90 days, which meant “vaccinated people were more susceptible to Omicron infection” by then.

In January 2022, Montagnier delivered a speech at a protest against vaccine certificates in Milan, Italy.