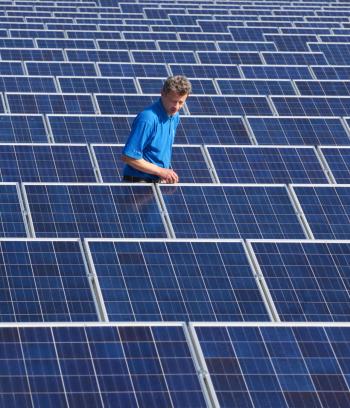 Feed-in tariffs will see higher prices being paid back to the householder for the solar energy produced but there needs to be a more representative body for the renewable energy industry in Australia say solar installers. (Michael Urban/AFP/Getty Images)
Business

WASHINGTON—Moving away from the reliance on high energy prices is no longer a pipe dream. Two innovative MIT professors, Daniel Nocera and Henry Dreyfus, developed groundbreaking, inexpensive solar energy storage systems that should be available for production within three years.

“Because the system is simple to manufacture, the team believes that it could be implemented within three years—even added onto existing solar-panel systems to increase their efficiency by 50 percent for minimal additional cost. That, in turn, would substantially reduce the cost of solar electricity,” said the researchers in a recent MIT press release.

The scientists drew on a 1970s idea that was shelved due to problems with attracting enough sunlight. Under this latest development, regular glass becomes a “high-tech solar concentrator,” according to the National Science Foundation.

Ten percent of all U.S. energy needs will be solar-generated by 2025, according to the recent “Utility Solar Assessment Study,” published by Clean Edge Inc. and the Co-Op America Foundation. As of 2007, around 1 percent of energy came from solar power.

With rising energy costs and new innovative cost-reduction discoveries by solar industry research, it will take about seven years for solar energy to be on equal footing with other energy sources and become a serious competitor.

“Recent industry developments, particularly large-scale solar deployment plans announced by major utilities, support the price projections outlined in this report,” the researchers claimed. “As utilities and others scale up their solar efforts, they are reaching economies of scale unlike anything we’ve seen in the past.”

Investments essential to achieve the 10 percent 2025 goal are considered to be within reach and inexpensive when compared to the funds invested by utilities and energy producing industries. The study suggests that it would carry a total cost of between $450 billion and $560 billion, which means an annual cost of between $26 billion and $33 billion. This annual cost pales in comparison to the $70 billion spent by utilities to build new power plants and distribution networks in 2007 alone, according to an estimate by the Edison Electric Institute.

Twelve American cities, among them Philadelphia, Denver, Houston, and Seattle, were on the recent Solar America Cities awards list, a brainchild of the Bush Administration’s Solar America Initiative.

The initiative was created by the U.S. Department of Energy (DOE) to encourage solar energy research and production in major cities. Each city within the program will receive $200,000 ($2.4 million in total) toward installation of various solar-based energy systems.

Additionally, the cities and solar companies will invest around $12 million in the project.

“These Solar America Cities aim to jumpstart integration of solar power and encourage other cities across the nation to follow suit … The innovative programs already underway in each city will help us raise the bar of what’s possible, and will help cities and towns across America harness the tremendous potential of the sun,” said Samuel W. Bodman, Secretary of Energy.

The Solar Energy Cause

With energy prices rising through the roof, solar energy—once seen as too expensive—is gaining interest.

It will take no more than three to seven years before unsubsidized solar power will achieve cost parity with conventional energy, according to a recent McKinsey Quarterly report. McKinsey & Co. is a New York-based consulting firm and think tank.

“The sector is still in its infancy,” according to McKinsey. “Even if all of the forecasted growth occurs, solar energy will represent only about 3 to 6 percent of installed electricity generation capacity, or 1.5 to 3 percent of output in 2020.”

The average cost for a 10,000 kWh solar generating system is around $40,000. The out-of-pocket cost to the individual will be cut by more than half as U.S. state governments contribute about 50 percent of that cost through rebates, credits, and tax breaks. The federal government can also provide up to $2,000, according to Kiplinger.com, a personal finance and business advisor Web site.

In 2007, the global market for certain solar photovoltaic (solar cell products that convert solar energy into electricity) components, increased by 62 percent over the prior year. Germany makes up 47 percent of the total increase and is by far ahead of any other nation concerning solar energy system installations. The United States and Japan are far behind with an increase of 8 percent in 2007.

Last year, the solar photovoltaic industry earned over $17 billion and 84 investors pumped an additional $10 billion into the industry, according to a recent report by Solarbuzz LLC, a global solar energy research and consulting company based in San Francisco.

McKinsey predicts that solar energy in areas with lots of sunlight will achieve competitive pricing with conventional and other types of energy systems by 2020. The cost for solar energy will fall to around 11 cents per kWh from today’s 30 cents.

Demand and installations of solar systems will increase by around 30 to 35 percent annually, “requiring capital investments of more than $500 billion,” said the report.