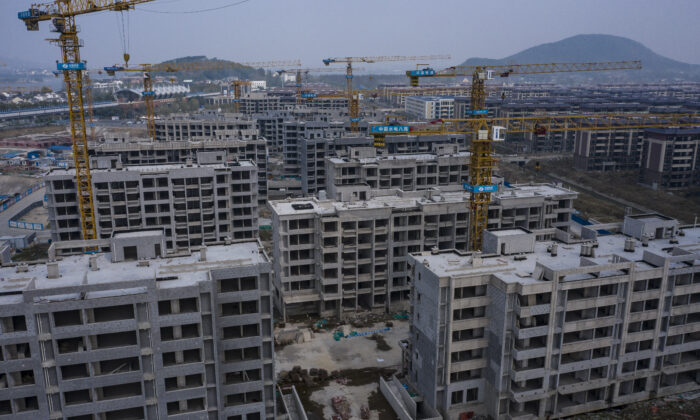 Amid a real estate developer debt crisis, China’s central bank consecutively lowered its Loan Prime Rate (LPR) in an attempt to stimulate sales in the property market. However, experts say that the move is unlikely to turn the market around.

On August 22, the Chinese central bank lowered its Loan Prime Rate (LPR) for the third time as property developers are incurring significant losses due to liquidity problems.

At least 50 listed developers disclosed losses in August, the season of interim financial reports, including those that have already reported a liquidity crisis, such as, Logan Group, Powerlong Real Estate Holdings, and China South City.

“The expected decrease in profit was primarily attributable to the tough business environment in the real estate industry and the continued impact of the COVID-19 pandemic,” the company stated.

As the top-ranked Chinese property developer, Greenland Holdings is also ranked 125 on the 2022 Fortune 500.

In a seminar on Aug. 22, the Central Bank of China revealed that now is the most challenging time to stabilize the economy while protecting reasonable financing needs of the real estate sector.

On the same day, the central bank lowered the five-year loan prime rate (LPR) for the third time this year, from 4.45 percent to 4.3 percent, down 15 basis points. Meanwhile, the one-year LPR was reduced by five basis points.

The LPR, serving as the pricing reference for bank lending, is calculated by the National Interbank Funding Center (NIFC) of China. Currently, the LPR consists of rates with two maturities: one year and over five years. The over-five-year LPR determines deposit and borrowing rates for five years and beyond.

On August 22, the day of the third LPR cut, mortgage rates for first buyers in Beijing, Shanghai, Guangzhou, and Shenzhen dropped to below 5 percent, with the lowest mortgage rate of many cities dropping to 4.1 percent, according to Shanghai Securities News.

“Over-five-year LPR is a benchmark interest rate for long-term loans, and the cut is to stimulate sales by reducing mortgage payments. However, the current demand for housing is low, mainly because people’s income has fallen due to the economic downturn, and their confidence in the future is weak,” Li Songyun, with a doctorate in economics and an expert on the Chinese economy, told The Epoch Times.

Mortgage rates in China have now fallen to a record low since 2007, but the contribution of real estate loans to new lending has fallen to 11 percent, the lowest level since 2009.

Since the beginning of this year, China’s commercial building sales have been declining in terms of area and sales. The country’s national real estate climate index (NRECI) also showed a continued decline since 2021, from 100.97 last July to 95.26 this year, except for a slight rebound of 0.08 in February.

NRECI is a composite index reflecting the current situation and development trend of the Chinese property market. Typically, the most appropriate level of NRECI is 100.

According to Li, China’s real estate sector has been heavily impacted by developer defaults and unfinished buildings.

An accumulation of millions of unfinished, pre sold buildings across China has led to severe problems that exceed the liquidity crises of property developers. Most Chinese banks are facing a mortgage payment halt or “mortgage strike”—where homebuyers refuse to pay mortgages unless the developers resume construction of the buildings.

S&P Global estimated that 2.4 trillion yuan (about $355 billion) of mortgages could be at risk of not being paid, which amounts to around 6.5 percent of all outstanding mortgages.

The rating agency also projects that home sales in China could drop as much as 33 percent this year amid the mortgage strike, which would further squeeze the liquidity of distressed developers and lead to more defaults.

The unfinished buildings have also trapped some upstream contractors. Shanghai Construction Group filed 75 lawsuits or arbitrations against property developers for payment defaults, with a combined total of 7.709 billion yuan (around $1.156 billion), according to an announcement on Aug. 12.

“The interest rate cut alone can not eliminate people’s concerns and therefore cannot stimulate the real estate market. In addition, the interest rate cut can only save about $4,500 per $145,000 in the mortgage,” Li said in response to the problem of the unfinished buildings.

“Moreover, according to the July statistics, the social financing growth reached a six-year low, indicating the failure of the previous monetary easing policies—credit demand is still sluggish with the economy falling into a liquidity trap.”

Li added that the most crucial factor leading to the weak property demand in China is the zero-COVID policy implemented by the Chinese Communist Party. And that small cuts in the LPR are unlikely to have much stimulating effect on the economy.