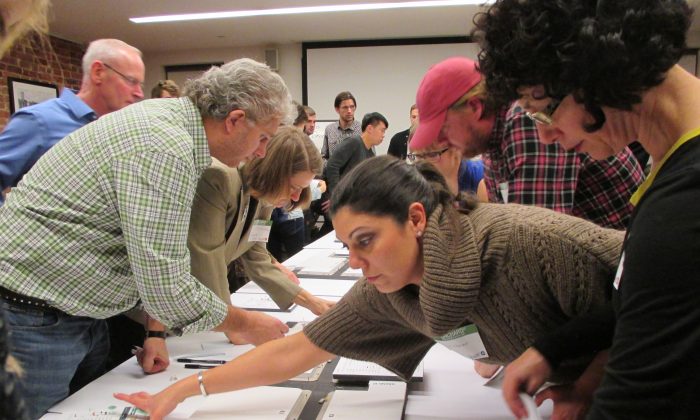 Orchard Street residents and business owners place markers on a scaled model of their street to show where they want to see more trees, benches, bike racks, parking meters, and other features at a street redesign meeting on the Lower East Side, New York, Feb. 19, 2014. (Catherine Yang/Epoch Times)
New York

NEW YORK—Business owners and residents of Orchard Street came together Wednesday night to create a miniature vision of what they want to see as the street’s future.

The workshop was put together by the Lower East Side Business Improvement District (BID) and will serve as a model for other planning processes in the neighborhood, said BID Executive Director Tim Laughlin.

Local design firm Pilot Projects had gone up and down the street, photographing, measuring, and taking note of every fixture to create a to-scale mini-model of the street for the hands-on workshop.

Every Sunday, three northern blocks of Orchard Street are transformed into a pedestrian mall where vehicles are prohibited from entering. It’s the only street that does so in the entire city.

Locals said they would like to extend that to the entire street from Canal Street to East Houston Street—which could serve as a model for other streets in the neighborhood, or even other neighborhoods.

There have been many individual projects like installing bike racks or planters, but no unified plan through Orchard Street, Laughlin said.

“This is such a good idea, this street has so much to offer,” said gallery and building owner Mark Miller.

Orchard is a narrow, historic street with a special charm and many pedestrians, said business owner Torsten Falegel.

Delivery trucks, tour buses, cars, bikes, and pedestrians all travel through the narrow street. As soon as one local suggested keeping parking spaces, another suggested tossing them.

The southern end of the street has a stretch of art galleries that visitors like to visit one after another before making their way to the shops and restaurants. The galleries rely on deliveries, and delivery trucks need parking, and it’s a neighborhood that wakes up around noon, so delivery hours aren’t early.

Car traffic, too, adds to the bustling nature of the street. If the locals opted to close the street to cars more often, Laughlin said, they would look into more events to liven up the sidewalks.

The project, sponsored by city officials, will result in a proposal for Community Board 3 to consider in the next 90–120 days.