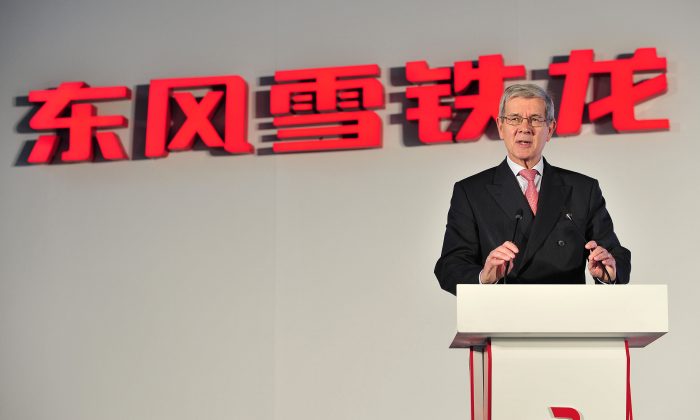 French state and Chinese Dongfeng could step in
By Catherine Yang

PSA Peugeot Citroën announced a less optimistic view of its partnership with General Motors Company Wednesday, another sign the alliance will eventually break.

The Transatlantic cooperation originally included “about forty” projects according to Peugeot’s program chief Jean-Christophe Quemard, but the projects have repeatedly been scaled back. GM’s main assets in Europe are Germany’s Opel and Britain’s Vauxhall. The bulk of the cooperation was supposed to be between Opel and Peugeot.

“The project of development of a new joint platform for B segment models with GM is under review as well as the relevant terms of the development agreement,” Peugeot Citroën stated in its earnings release. It previously estimated savings of $1 billion from its joint vehicle development program with GM, but stated it figure “may be readjusted downward.”

The company suggested the core of the partnership, a project to develop small cars, may be canceled.

GM took a 7 percent stake in French Peugeot Citroën last year, making it its second biggest shareholder, but Peugeot Citroën has been examining other partnerships as it confirmed earlier this month.

Both companies have been struggling in Europe. Peugeot Citroën, the second biggest carmaker in Europe, reported losses in automotive revenues by 5.8 percent in the third quarter. It expects another 4 percent decline in Europe for 2013, a reflection of the slowly stabilizing European market.

GM lost around $18 billion in European operations over the past 12 years and stated it expects to stop the bleeding in the middle of this decade. It recently put Russian operations back under control. Russia is Opel’s only major growth region, and the only growing European car market.

Peugeot Citroën is reportedly in talks to raise capital of $4.13 billion with a goal to conclude the deal at the end of the year. Under the deal, the French government and Chinese company Dongfeng Motor Corp. would take an equal stake of about 20–30 percent. This change in ownership would allow GM to exit from the partnership states a provision in the contract.

Peugeot currently operates three factories with Dongfeng in China, which is the company’s strongest market. Sales were up 38 percent in the third quarter, Peugeot Citroën stated, and there are plans to increase production capacity by two-thirds by the end of 2015.

“PSA will remain a French company,” French Industry Minister Montebourg told Le Parisien daily, but he did not deny there could be Chinese investment.

Frankfurt-based analyst Sascha Gommel told Binary Tribute the government participation would be negative for Peugeot. It would dilute the company’s restructuring plans to keep more jobs in France.

“If Peugeot wants to get out of trouble, they need another partner. Dongfeng could be really good,” Erich Hauser of International Strategy & Investment Group told Bloomberg Television.

Paris-based Natixis analyst Georges Dieng says otherwise. “This leaves a hole in their [Peugeot’s] strategy, and I don’t see how they can fill it,” he said of GM dissolving the partnership according to Reuters. “Dongfeng doesn’t really offer an alternative.”