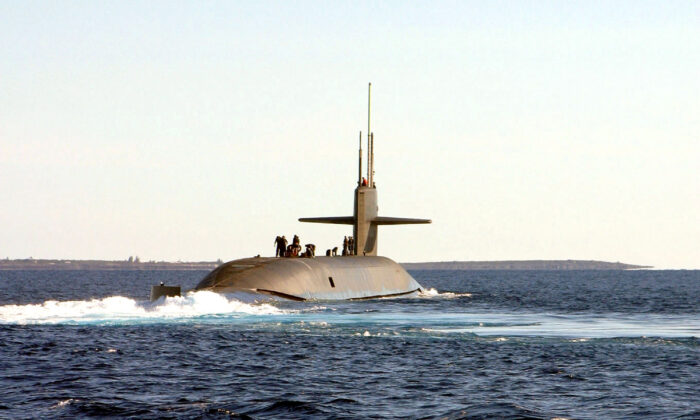 The Ohio-class USS Florida sails off the coast of the Bahamas on Jan. 22, 2003. (David Nagle/U.S. Navy/Getty Images)
US News

A new type of low-yield nuclear missile has been added to the U.S. military’s undersea arsenal, the Department of Defense has confirmed, with reports suggesting the weapons pack much less power than the Hiroshima bomb.

These so-called tactical nukes aim to negate similar Russian warheads, which are designed not to level cities but for use on the battlefield.

The funding and legislation for the W76-2 missile were approved by Congress over the past two budgets, in line with the demands of the Trump administration’s 2018 Nuclear Posture Review (NPR).

A report last week by the Federation of American Scientists claimed that the missile—made by tweaking regular submarine-launched warheads—was now aboard Trident submarines.

“Each W76-2 is estimated to have an explosive yield of about five kilotons,” its report stated.

That’s about one-third of the explosive power of the “Little Boy” nuclear bomb dropped on Hiroshima, Japan, during World War II.

The Pentagon confirmed today that the submarine-launched W76-2 missile has been deployed, but provided no further details, other than outlining the rationale for its creation.

“In the 2018 Nuclear Posture Review, the department identified the requirement to ‘modify a small number of submarine-launched ballistic missile warheads’ to address the conclusion that potential adversaries, like Russia, believe that employment of low-yield nuclear weapons will give them an advantage over the United States and its allies and partners,” John Rood, the under secretary of defense for policy, said in a statement.

The precise explosive power of the warhead isn’t confirmed.

A report by the Congressional Research Service (CRS) in January noted that the W76-2 would be configured “for primary-only detonation,” as per the NPR.

According to the CRS report, “This could mean a yield of less than 10 kilotons.”

The United States already has low-yield nuclear weapons. However, these were limited to cruise missiles and B61 bombs, with limited capacity to pierce the defenses thrown up by Russia in recent years.

Russia has been expanding its arsenal of low-yield nuclear weapons, according to the NPR.

“The recent Russian statements on this evolving nuclear weapons doctrine appear to lower the threshold for Moscow’s first-use of nuclear weapons,” according to the NPR. “Russia demonstrates its perception of the advantage these systems provide through numerous exercises and statements. Correcting this mistaken Russian perception is a strategic imperative.”

Some reports in the previous two or three years had already suggested that the United States should consider submarine-based, low-yield weapons of its own to counter the Russian threat.

Opponents of the W76-2 say that it raises the risk of nuclear war. They argue that its reduced destructive power could make it a more tempting option than the unthinkable full-scale nuclear option—but that its use would quickly escalate.

The NPR emphasized that the intention of the low-yield missile was to reduce the possibility of nuclear conflict, not to raise it.

“To be clear, this is not intended to enable, nor does it enable, ‘nuclear war-fighting.’ Nor will it lower the nuclear threshold,” the NPR states.

The new missiles will travel under the ocean aboard the Navy’s Ohio-class submarines, along with the submarine-based Trident missiles that make up a third of the nuclear “triad.” The other two legs are currently the long-range B-2 and B-52 bombers, and the Minuteman 3 missiles scattered throughout the United States.