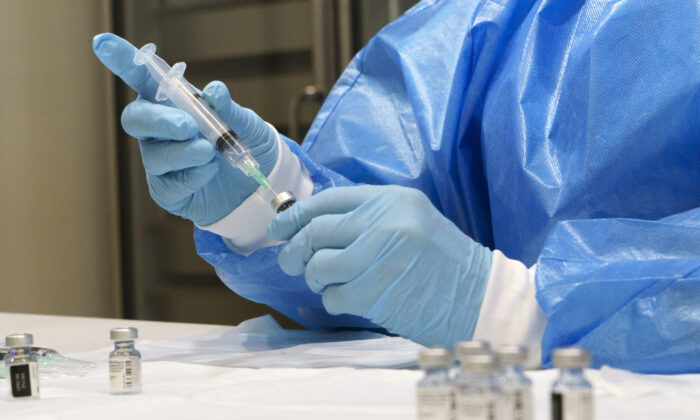 A syringe is prepared with COVID-19 vaccine at a vaccination clinic in Montreal, on March 15, 2021. (The Canadian Press/Paul Chiasson)
Canada

Expectant mothers appear more hesitant to receive COVID-19 shots than the general population, as unpublished data show that vaccination rates for this group are much lower than the national average, says a report by the National Advisory Committee on Immunization (NACI).

“The uptake of Covid-19 vaccine has been lower among pregnant people compared to non-pregnant people in Canada,” said the report, titled “Updated Guidance On Covid-19 Vaccines For Individuals Who Are Pregnant Or Breastfeeding,” published on Sept. 9, and first reported by Blacklock’s Reporter.

“Preliminary unpublished evidence in Ontario indicates that primary series vaccine coverage among pregnant people (71%) was 16 percentage points lower than in the general female population of reproductive age in Ontario by the end of 2021.”

NACI has been recommending pregnant women get vaccinated against COVID-19 since May 2021. The report says that since the advisory committee began studying the vaccines for pregnant women “additional evidence has accumulated further supporting the safety of mRNA COVID-19 vaccines in pregnancy and breastfeeding.”

NACI said in the report that their advice and recommendations were based upon the “best current available scientific knowledge.”

In an update by the Public Health Agency of Canada on Sept. 2, adverse events caused by COVID vaccination show five fetal growth restrictions and 85 spontaneous abortions as of Aug. 19 for all brands of COVID-19 vaccines. The data were excluded from a total of 370 deaths reported following vaccination.

The Pfizer-BioNTech product is associated with all five fetal growth restrictions and 64 spontaneous abortions. It is by far the most administered COVID-19 injection in Canada, with over 66 percent of total doses, as of Aug. 14.

An internal Pfizer email thread that was recently disclosed as evidence in a court case challenging the government’s COVID-19 vaccine mandate for travellers, said the drug company’s clinical trials on pregnant women have been discontinued.

“The study enrolment was stopped with incomplete numbers because recruitment was slow and it became unreasonable/inappropriate to randomise pregnant women to placebo given the amount of observational evidence that the vaccine is safe and effective, coupled with increasing number of technical committees supporting immunization of pregnant women,” said Jelena Vojicic, vaccines medical lead at Pfizer Canada, in an April 4 email.

Vojicic was responding to Dr. Eliana Castillo, a professor of medicine at the University of Calgary, asking why Pfizer had stopped enrolling subjects for its pregnancy trial, and if enrolment was complete.

Pfizer and BioNTech had announced via a press release on Feb. 18, 2021, that the first participant in its global trial had been dosed to evaluate the “safety, tolerability, and immunogenicity” of their BNT162b2 vaccine in pregnant women.

No subsequent press release on the trial was ever published.

The Epoch Times contacted Pfizer Canada to confirm the termination of the trial and the associated rationale but didn’t hear back.

The Epoch Times also reached out to Health Canada to find out if Pfizer had told the agency it was not pursuing its clinical trial on pregnant women and if this was a concern for them. An unidentified spokesperson deferred comment to Pfizer.