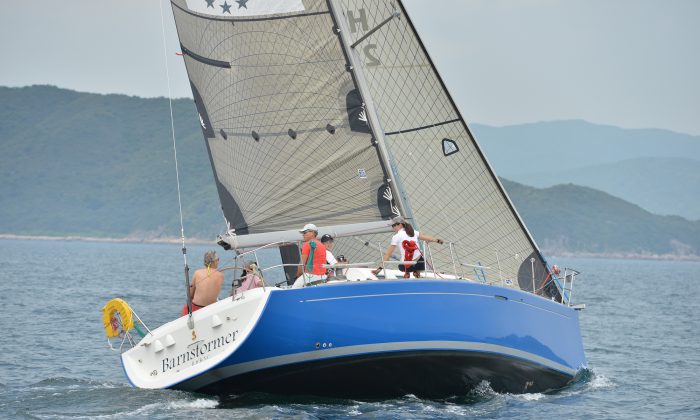 ‘Barnstormer’ in her new livery took line honours in IRC Division Races 1 and 2 of the Summer Saturday Series on Saturday May 25. She is seen here performing in the Spring Saturday Series on May 11. (Bill Cox/The Epoch Times)
International

Heavy rains dampened organisers’ hopes of a big turnout for the first race day of the Hebe Haven Yacht Club Summer Saturday Series on May 25.

Just 21 boats braved the weather following an official warning by the Hong Kong Observatory to expect rainfall of more than 30mm per hour in the lead up to racing.

With an Amber Rainstorm Signal in place during the morning, it is not surprising that boat numbers were a little down. Although there was a strong rainstorm early in the day, the warning proved inaccurate and the weather brightened for the start of the racing, with winds of 10 knots for Race-1, before falling back to 5 knots for Race-2.

HKPN Division was best supported with 10 boats taking part, but other divisions were probably undersubscribed as boats that normally travel from other locations decided not to venture out.

However, there is still plenty of time left in this 12-race series for others to join in as it continues for a further five race days, concluding on Aug 3.

Barnstormer took line honours in each of the two races, but was beaten on corrected time, with Taxi taking the spoils in both races. Moll also pushed ahead of Barrnstormer in Race-2, while RB and Avant Garde took positions four and five, respectively, in both races.

Bits & Pieces was the lead boat in both of the HKPN Division races and she also won Race-1 on corrected time ahead of Jazz (Justin Shave), Kyte and Dea II, respectively. In Race-2, Bits was pushed into fourth place behind Kyte, JeNa PaBe and Jazz, respectively. Windseeker, GA, Getafix Little Step and Paloma all have a bit of catching up to do as they finished down the order in both races.

SMS Sports Boats and Dragons could only muster three boats in each Division. Fly By Wire, Merlin and Good Vibrations always rise to the occasion and the thought of bad weather was not going to deter them. Honours were shared by Fly By Wire and Merlin with alternate wins, while Good Vibrations took it at a slightly more relaxed pace.

The Hebe Haven Typhoon Series will start this coming Sunday June 2 and runs through to Aug 17 with all races on Sundays except for the Saturday-Sunday Mirs Bay Passage and Return race on July 27-28. On Saturday July 27, an Island course will be set for J80s and SMS Sports boats in place of the Mirs Bay Race.

The Typhoon Series comprises nine races in total with varying discards allowed depending upon boat category and number of races conducted.