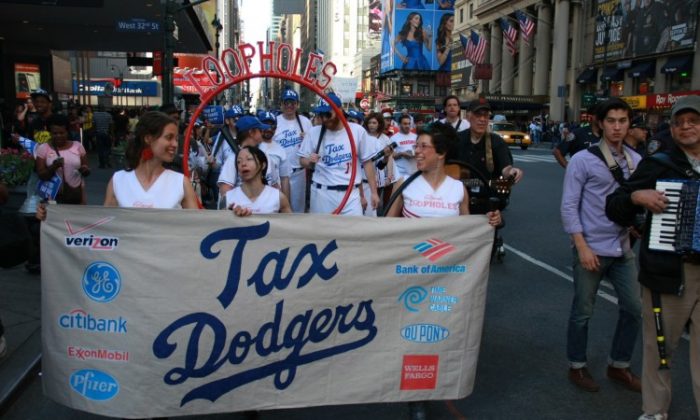 NEW YORK—A series of demonstrations drew hundreds of New Yorkers to protest corporations and wealthy individuals paying low taxes, both through low rates and loopholes, according to the organizing groups.

“We’re joining workers, and students, working-class families who are paying their taxes today, and we’re protesting the fact that corporations and the wealthy pay fewer or no taxes at all,” said Ana Maria Archila, co-executive director of Make the Road New York, a civic and immigrant advocacy organization.

The group protested in the morning at the Bushwick Post Office and the James A. Farley Post Office. In the evening they gathered at 42nd Street and Sixth Avenue and went on a march, stopping at the offices of Bank of America, Chase, and Wells Fargo, and corporations such as General Electric and Verizon.

“The loopholes are so vast and so many that some, like General Electrics for instance, don’t pay anything,” said Gabriel Falsetta, of the news website People’s World, at one of the protests.

Bank of America and Wells Fargo told The Epoch Times that the banks do pay  taxes. Bank of America paid approximately $2 billion last year. Wells Fargo paid nearly $4 billion and made $15.87 billion. The bank’s tax rate is in the teens, said a spokesperson, who added, “We honor all our obligations at the federal, state, and local levels.”