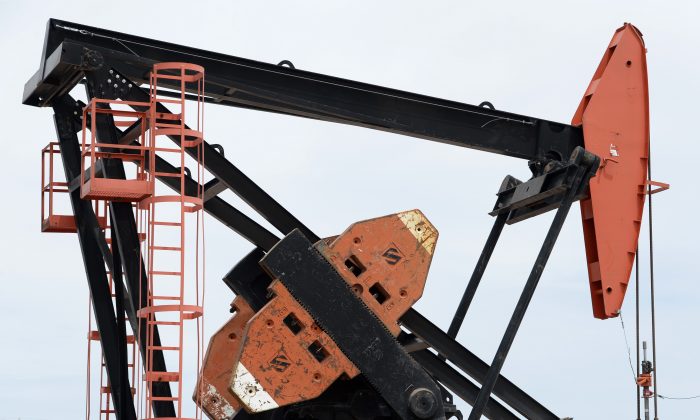 View of an Argentine oil company YPF's pumpjack to extract oil from a well at Loma La Lata, near Vaca Muerta shale oil reservoir, in the Patagonian Province of Neuquen, some 1180 km southwest of Buenos Aires, Argentina, on Dec. 4, 2014. YPF has an agreement with U.S. Chevron to exploit Vaca Muerta, the world's second largest reserve of shale gas and fourth largest reserve of oil, estimated to contain the equivalent of 27 billion barrels. (Juan Mabromata/AFP/Getty Images)
Business & Economy

Oil price rises over the past 40 years have been truly spectacular, but the recent fall is probably here to stay, thanks to increasing production. We discuss these trends in our new book, “The Price of Oil,” published this month.

In constant money, prices rose by almost 900 percent between 1970–1972 and 2011–2013. This can be compared with a 68 percent real increase for a metals and minerals price index, comprising a commodity group that, like oil, is exhaustible.

In our view, it is political rather than economic forces that have shaped the inadequate growth of upstream oil production capacity, the dominant factor behind the sustained upward price push.

But we believe the period of excessively high oil prices has now come to an end. The international spread of two revolutions will assure much more ample oil supplies, and will deliver prices far below those experienced over the past decade.

Beginning less than a decade ago, the shale oil revolution has turned the long run declining oil production trends in the United States into rises of 73 percent between 2008 and 2014. An exceedingly high rate of productivity improvements in this relatively new industry promises to strengthen the competitiveness of shale output even further.

A series of environmental problems related to shale exploitation have been identified, most of which are likely to be successfully handled as the infant, “wild west” industry matures and as environmental regulation is introduced and sharpened.

Geologically, the United States does not stand out in terms of shale resources. A very incomplete global mapping suggests a U.S. shale oil share of no more than 17 percent of a huge geological wealth, widely geographically spread. Given the mainly non-proprietary shale technology and the many advantages accruing to the producing nations, it is inevitable that the revolution will spread beyond the United States.

We have assessed the prospects of non-U.S. shale oil output in 2035, positing that the rest of the world will by then exploit its shale resources as successfully as the United States has done in the revolution’s first ten years. This would yield rest of world an output of 19.5 million barrels per day in 2035, which is similar to the global rise of all oil production in the preceding 20 years—a stunning increase with far-reaching implications in many fields.

Another related revolution is beginning to see the light of the day, but news about it has barely reached the media. It is being gradually realized that the advancements in horizontal drilling and fracking can also be applied to conventional oil extraction.

If the rest of the world applies these techniques to conventional oil, as the United State has done, this would yield a further addition of conventional oil amounting to 19.7 million barrels per day by 2035.

The oil output increases are bound put downward pressure on prices, either by preventing price rises from the first-half 2015 levels, averaging some $57 per barrel (Brent spot), or by pushing them back to these levels if an early upward reaction takes place.

Our optimistic scenario, which appears increasingly likely, sees a price of $40 by 2035.

The global spread of these revolutions and the ensuing price weakness that we envisage for the coming two decades will, on balance, provide a great advantage both to the oil industry and to the world economy at large.

Not surprisingly, public income from oil in producing nations may fall if they fail to compensate for falling prices by expanding output. We also suspect that the effects of the resource curse—where, paradoxically, nations with large resources don’t experience economic growth—will ease as prices decline.

The two revolutions will apparently cement and prolong the global oil dependence, with implications for climate policy. The efforts to develop renewables for the purpose of climate stabilization will become more costly, requiring greater subsidies, in consequence of lower oil prices.

The abundance caused by the revolutions will lead to hard to fathom changes in international political relations. Much of the oil importers’ urge for political intervention and control will dissipate as access to oil becomes less urgent.

For instance, the heavy diplomatic and military presence of the United States in the Middle East is likely to be questioned when the country’s dependence on oil from the region is further reduced.

The growth and geographical diversification of supply would not only suppress prices, but would also promote competition among suppliers and make it more difficult for producers to use energy sales in pursuit of political ends.

Roberto F. Aguilera is an adjunct research fellow in energy economics at the Curtin University. Marian Radetzki is a professor of economics at the Luleå University of Technology. This article was previously published on TheConversation.com.