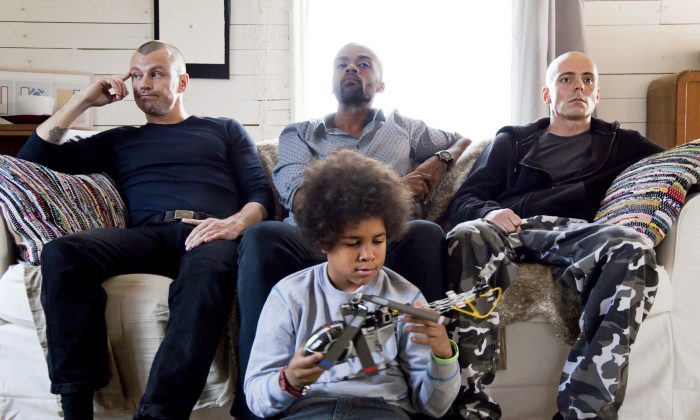 “Heart of a Lion” follows the transformation of Neo Nazi Teppo (left) as he falls in love with a woman whose son is half black. (Courtesy of TIFF)
Entertainment

Love Trumps Nazi Hate in ‘Heart of a Lion’

TIFF REVIEW: 'Heart of a Lion'
By Matthew Little

Neo-Nazis don’t normally make compelling love interests. Especially one recently out of jail for beating a Morrocan to the edge of death.

But as much as Teppo (Peter Franzén) might hate Muslims and immigrants that don’t pay their taxes, he loves Sari (Laura Birn) more, and Sari has a son who is half black.

It’s an unlikely setup, but what transpires in an uplifting movie, well told thanks to a compelling performance by Franzén. His portrayal of Teppo captures the inner turmoil of a man who has built a life around hatred only to discover love with an unlikely catch.

Teppo’s relationships, sense of honour, and understanding of patriotic duty have long lied with his skinhead brethren, a group of angry misfits who brandish tattoos of Nazi swastikas and the white lion of Finland to show their white nationalist pride.

In their world, the ugliness of racial violence is justified by misplaced patriotism. It’s a delusion Teppo must face head on when he decides to put his own hatred aside so he can earn a place in Sari’s life and become a father to her devoutly Islamic son.

But leaving his old life behind isn’t so easy, especially not when his zealous neo-Nazi brother comes to visit, and the violence of intolerance puts everyone’s life in danger.

So far there are no clear details on when it will be available for viewers outside its birthplace of Finland.

“Heart of a Lion” made its world premiere at the Toronto International Film Festival. While it may or may not enter theatres in North America, it will likely be available on iTunes at some point like director Dome Karukoski’s previous movie, “Lapland Odyssey,” a well-received comedy.