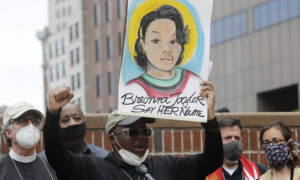 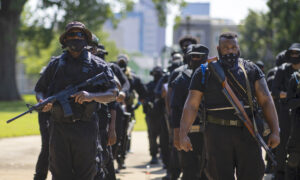 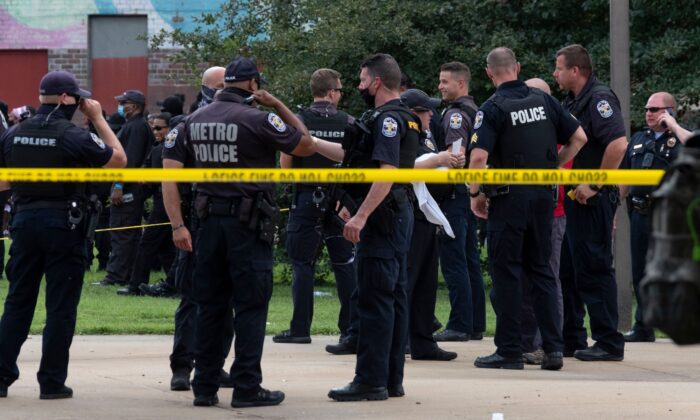 Members of the Louisville Metro Police Department congregate around the place where Breonna Taylor was shot during a rally to protest her killing, in Louisville, Kentucky on July 25, 2020. (Jeff Dean/AFP via Getty Images)
US News

Louisville Police Clamp Down on Protest Caravans Over ‘Aggressive Behavior’

Louisville’s Metro Police Department (LMPD) says it will crack down on protest caravans, citing safety concerns and a recent surge in “aggressive behavior” in Kentucky’s largest city, which has been the scene of weeks of unrest.

In a statement on Twitter, LMPD said Aug. 9 that caravans would no longer be allowed and that all protesters would have to follow normal traffic laws.

“LMPD continues to balance the First Amendment right to protest with the public safety needs of the entire community,” the department stated. “For nearly 75 days, Louisville residents have taken to the streets to express their desire for accountability and change.

“One of the primary ways of doing that has been to hold nightly caravans—both cars and foot marches—throughout the city,” LMPD said.

LMPD continues to balance the First Amendment right to protest with the public safety needs of the entire community. For nearly 75 days, Louisville residents have taken to the streets to express their desire for accountability and change. pic.twitter.com/2jNGO2Uayc

Examples of “aggressive” behavior regularly seen in these caravans, the LMPD said, include reckless driving that has endangered the lives of others, pointing weapons at others, throwing items from vehicles, confrontations with other drivers who encounter the caravan, and blocking intersections for extended period of time.

The city police department announced that as of Aug. 9, it will enforce all laws as it relates to the caravan.

“All pedestrians must stay out of the streets—staying on sidewalks and following all laws for pedestrian traffic,” LMPD said. “Cars and pedestrians will not be allowed to block intersections for any length of time.”

The office added that participants who refuse to comply with “any law or lawful order” will be cited or arrested.

According to The Courier-Journal, a Black Lives Matter Louisville protester responded to the LMPD announcement by saying that they would continue to protest until the three Louisville law enforcement officers involved in the shooting of Breonna Taylor—a 26-year-old woman who was shot dead in her own home in March—face criminal charges.

The special agent in charge of Louisville’s FBI field office said last month that the case is “top priority” for agents in the city; federal officials are probing potential civil rights violations by the officers.

The announcement came a day after clashes between police officers and protesters who reportedly vandalized property and set up roadblocks in the city on Aug. 8.

An LMPD spokesperson told the newspaper that “protesters, during their march, blocked roadways, surrounded vehicles that tried to avoid the protest, shot paintballs (at) passing motorists, destroyed property at 4th Street Live while it was occupied with patrons, set trash cans on fire, and then continued to Jefferson Square.”

“Based off these actions, the assembly was deemed unlawful,” the spokesperson added.

Hundreds of protesters continued to gather and march toward Jefferson Square at around 7 p.m. on Aug. 9 despite the department’s order, resulting in the arrests of at least two people, WLKY reported.