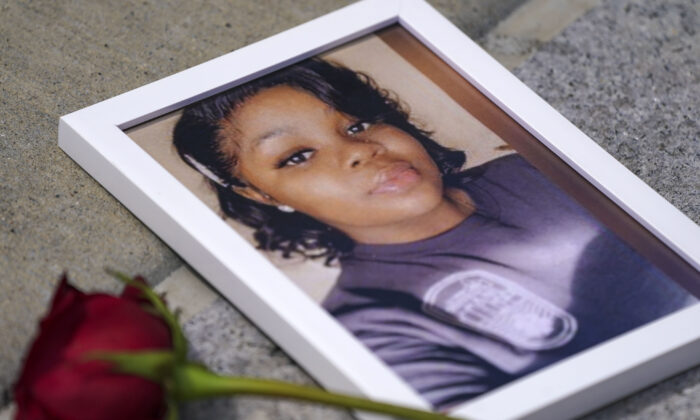 A photograph of Breonna Taylor in Washington on July 30, 2022. (Leigh Vogel/Getty Images for Frontline Action Hub)
US News

The Louisville Metro Police chief announced Friday the termination of Sgt. Kyle Meany who is facing federal civil rights charges related to the shooting death of Breonna Taylor in 2020, according to reports.

Louisville Metro Police Chief Erika Shields said she made the decision to fire Meany before he faces court after “careful consideration and not with ease.”

“I fully respect the judicial process and realize Sergeant Meany has yet to be heard before a jury of his peers,” said Shields in a statement obtained by CBS News.

“That being said, he is facing multiple federal charges after a lengthy investigation by the DOJ. As an employer, the character of our organization is paramount and it is not reasonable to expect continued employment under such conditions.”

Meany is one of four former and current police officers indicted on Aug. 4 in connection with Taylor’s death.

Hankison and Jaynes were already fired, and termination procedures are underway for Goodlett, CBS News reported.

U.S. Attorney General Merrick Garland said on Aug. 4 that charges against the officers “stem from the falsification of a search warrant.”

Meany and Jaynes are accused of violating Taylor’s Fourth Amendment rights when they sought a warrant to search her apartment in 2020 despite lacking probable cause.

The officers allegedly carried out the search knowing that an affidavit in support of the warrant contained false and misleading details and omitted material information.

The pair also knew that executing the search warrant could create a dangerous situation for anyone else who was in her home at the time, according to charging documents.

Taylor was shot dead in her home on March 18, 2020, when officers serving the warrant were fired upon by Taylor’s boyfriend, Kenneth Walker, who allegedly thought they were home intruders, CBS News reported. Police fired back two dozen bullets, some of which struck Taylor.

“As outlined in the charging documents, the officers who ultimately carried out the search at Ms. Taylor’s apartment were not involved in the drafting of the warrant and were unaware of the false and misleading statements it contained,” Garland said.

“When those officers executed the search warrant, Ms. Taylor was at home with another person who was in lawful possession of a handgun.

“When officers broke down the door to Ms. Taylor’s apartment, that person—believing that intruders were breaking in—immediately fired one shot, hitting the first officer at the door.

“Two officers immediately fired a total of 22 shots into the apartment. One of those shots hit Ms. Taylor in the chest and killed her,” he said.

Garland said the DOJ alleges that the officers who allegedly falsified the affidavit knew their actions “could create a dangerous situation” and that those unlawful acts resulted in Taylor’s death.