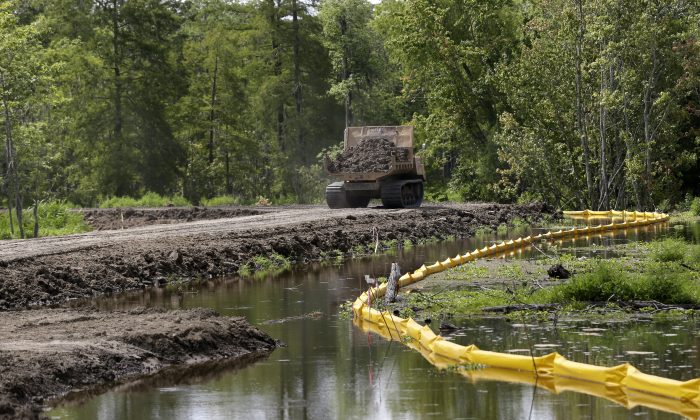 In this Thursday, June 27, 2013 photo, a truck hauling dirt rides along a berm set up to contain an approximate 22-acre sinkhole in Bayou Corne, La. Neighbors in tiny Bayou Corne face a wrenching decision after a huge sinkhole opened up near their community: Do they stay put or should they pack up and move? The sinkhole resulted from a collapsed underground salt dome cavern about 40 miles south of Baton Rouge. After oil and natural gas came oozing up and acres of swampland liquefied into muck, the communitys 350 residents were advised to evacuate. Texas Brine Co., the operator of the salt dome, is negotiating buyouts of residents who have not joined lawsuits against the company. (AP Photo/Gerald Herbert)
US

The Assumption Parish, Louisiana sinkhole sucked up a clump of trees on Wednesday evening, and it was caught on video.

The video, taken by a parish official, shows the trees quickly swallowed by the sinkhole.

The edge collapse, or “slough-in,” happened at about 5:30 p.m., parish officials told The Advocate.

The collapse came after the hole’s periodic increases in underground tremors, also known as burps. After the burps the monitoring alert status was increased to Code 3, which restricts all work inside the containment berm.

The sinkhole has been growing since it emerged sometime late August 2 or early August 3 last year, and continued growth is expected for some time, perhaps years.

The sinkhole is believed to be caused by a failed cavern wall in the western-edge caverns under the Napoleonville Salt Dome owned by Texas Brine. The collapse triggered a chain-reaction of collapses that hasn’t stopped.

The hole is now about 25 acres in size. It has forced numerous residents to move out of the area.