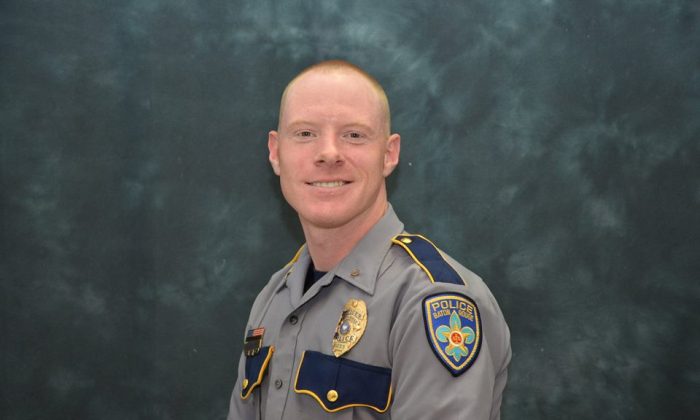 Cpl. Shane Totty, a four-year veteran of the Baton Rouge Police Department, was killed in the line of duty escorting a funeral procession in Baton Rouge on Feb. 1, 2019(Baton Rouge PD photo)
Crime and Incidents

A Louisiana police officer who survived being shot in the face last year died on Feb. 1 while escorting a funeral procession, when a vehicle slammed into his motorcycle.

Baton Rouge police Cpl. Shane Totty was killed in the line of duty when a pickup truck pulled out of an apartment complex and struck the motorbike he was riding, according to reports.

Totty was rushed to hospital but died from his wounds.

“BRPD Cpl. Shane Totty, 31, succumbed from his traffic crash injuries late this afternoon at a local hospital. Please continue to keep the Totty family and our department in your prayers,” the Baton Rouge Police Department said on its Facebook page.

“His police motorcycle collided with another vehicle that pulled out in front of him at approximately 2:40 p.m. Bystanders and responding officers performed CPR before he was transported to a local hospital. He succumbed to his injuries a short time later,” a note on the Officer Down Memorial Page states.

“The Sheriff’s department has been tasked with investigating that accident,” said Paul, adding, “we’re asking you to keep our officers in your prayers.”

“The Sheriff’s office is investigating the accident,” said Gautreaux, adding, “we’re going to look at all the evidence involved. A young man was involved in the accident, we’re going to have to wait for toxicology to come back from him.”

Gautreaux added there were charges pending against the driver, but “what those charges are we can’t say until we get finished with the investigation.”

“It’s a sad day today,” Paul said, adding, “it just highlights how our officers put their lives on the line every day.”

“It’s a tragedy that’s felt by all law enforcement,” Gautreaux said, adding “it’s unfortunate, but it goes along with the territory.”

Totty was shot in the face last February, The Advocate reported, when a suspect shot into the windshield of Totty’s police vehicle. Totty was hit in the eyes and face by flying glass and shrapnel, WBRZ reported, and a bullet was found in his headrest.

Eugene Thomas Jr., 34, a man with severe mental health issues, was identified as the gunman in that shooting.

Totty managed to make a full recovery and returned to work. He requested a switch to motorcycle duty.

“He’s a fighter,” the BRPD chief said Friday night, KCCI reported, recalling visiting Totty in the hospital. “He was a really bright young man. He had a bright future with the police department.”

WBRZ reported that the same surgical team that treated Totty after last year’s shooting, fought to save the deputy’s life after Friday’s collision.

Totty was also reportedly a new father to a baby girl and was planning a wedding with his fiancée.

“Life was good for him. He had survived this near-death experience and everything was positive and going his way,” said Capt. Don Kelly, according to Fox News. “How tragic that everything could be taken away in the blink of an eye. We’re all hurting.”

“It’s such a sad irony after what happened and everything he went through — it’s just cruel,” Kelly told The Advocate. “It’s unbelievable. It’s heartbreaking.”

Fallen In The Line of Duty

According to the Officer Down Memorial Page, the past year saw 150 officers lose their lives in the United States in the line of duty.

The largest number of law enforcement officers—53—died from gunfire. One of those deaths was deemed accidental, the remaining 52 were shot with intent to kill.

Automobile crashes claimed 25 officer lives in 2018, the second most common cause of death among law enforcement agents.

So far in 2019, the total line of duty deaths stands at 11, according to the website, with the most recent entry being that for Cpl. Shane Totty.