Man was protesting pastor's defiance of ban on mass gatherings 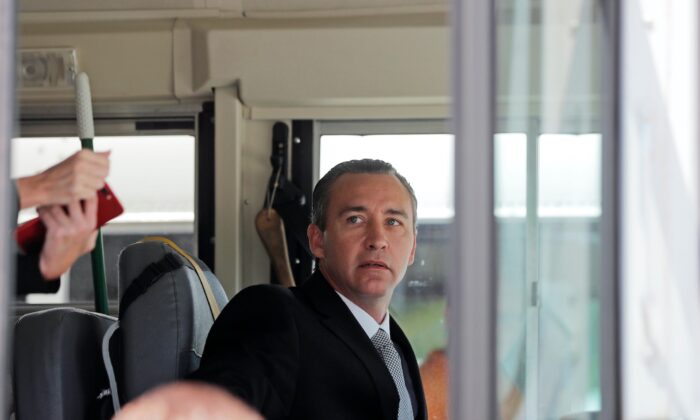 Tony Spell, pastor of the Life Tabernacle Church, sits in the drivers seat of one of his church buses as he prepares to leave the East Baton Rouge Parish jail after posting bond in Baton Rouge, La., on April 21, 2020. (Gerald Herbert/AP photo)
By The Associated Press

BATON ROUGE, La.—Louisiana authorities arrested a pastor on an assault charge on Tuesday after he admitted that he drove his church bus toward a man who has been protesting his decision to hold mass gatherings in defiance of public health orders during the CCP virus pandemic.

The police department in Central, a suburb of the capital of Baton Rouge, said in a Facebook post that Tony Spell, pastor of the Life Tabernacle Church, turned himself into the department and was arrested on charges of aggravated assault and improper backing. Officials said Spell also had outstanding traffic tickets.

Spell was taken to the East Baton Rouge Parish prison, where about 70 of his parishioners, dressed in their Sunday best, arrived in church buses to show support. Men in jackets and ties, women in dresses, and children, some in matching outfits, gathered in a parking lot across the street. They stood close to each other, praying and singing hymns while guards, some wearing protective masks watched.

Spell eventually walked out of the jail to applause from his supporters, after his wife entered the jail with a handful of cash that had been delivered by someone in a car. Online booking records indicate bail was set at $175.

“My rights to have church and to preach the gospel of Jesus Christ are endowed to me by my creator, not my district attorney, not my chief of police and not my governor, John Bel Edwards,” Spell said. “Not my president and not my Department of Justice.”

The arrest happened on the same day the East Baton Rouge Parish coroner reported that deaths in the parish, which encompasses the state capital of Baton Rouge and Central, had surpassed 100.

Before Spell was released, one Spell supporter shouted defiantly at Trey Bennett, the protester Spell is accused of assaulting. Bennett also showed up at the jail, carrying his protest sign. It says “Close this church” on one side and “Danger: coronavirus incubator” on the other.

“Our church will never close, you get that?” the man yelled.

Bennett has kept up a one-man demonstration in front of the church since Easter Sunday, when he noticed hundreds of parishioners still attending services in defiance of the state’s stay-at-home mandate, which bans gatherings of more than ten people. Many houses of worship across Louisiana have turned to online services instead.

This Sunday, Spell drove a church bus in reverse in the direction of the sign-holding protester. Spell acknowledged as much in a telephone interview with WAFB-TV on Monday. He said he just wanted to get out and confront the protester, but his wife talked him out of it.

Spell already faces misdemeanor charges for holding in-person church services despite the ban on gatherings. Authorities have said they did not book him into jail previously because they did not want to add to the jail population at a time when the highly infectious disease is running rampant. They have not taken any action to close his church.

Parishioner Nathan Boyce Thomas also faces charges of aggravated assault and reckless operation of a vehicle after being seen on video driving his white pickup truck to within about a foot of where Bennett was standing at the road side. Police said Thomas drove at a high rate of speed, then braked just before turning into the church parking lot. Dougherty said Thomas also planned to turn himself in later Tuesday.

Bennett said he was used to getting scowls and verbal jabs from parishioners, but was “shocked” to see vehicles being driven at him.

Videos of the two incidents on April 19 were obtained and reviewed by The Associated Press. One shows the church bus making a sharp turn and then backing in the opposite direction of traffic on the shoulder to within a few feet of Bennett before coming to a stop. Another shows a white pickup truck swerving out of its lane and onto the shoulder within about a foot of Bennett’s body.

By Gerald Herbert and Stacey Plaisance