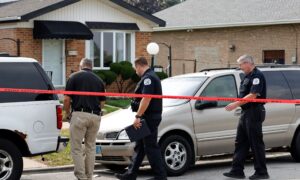 DOYLINE, La.—An officer died after being met with gunfire while responding to a disturbance call at a home in a small village in northwestern Louisiana, officials said.

William Earl Collins Jr. was fatally shot while responding to the home in Doyline, and died just before 8 p.m. Friday, Webster Parish Sheriff Jason Parker told a news conference. The sheriff did not provide Collins’ age, but said he was known as “Billy” and had been with the sheriff’s office for about 10 years.

Collins was a Webster Parish deputy but was working as a patrol officer for Doyline when he responded to the call. Parker said Collins was the first officer to arrive on the scene. Two other deputies also responded but were not hurt.

The suspect barricaded inside the home for several hours after the shooting. News outlets reported two loud bangs could be heard just before 11 p.m., and then the suspect was taken into custody. Parker declined to give further details or identify the suspect but said he was taken to a hospital with life-threatening injuries.

Doyline is located about 20 miles (32 kilometers) east of Shreveport. Its population in the 2010 census was about 800 people.

Mayor Steven Bridwell said he has lived in Doyline for most of his life.

“This has got to be the most tragic day that I’ve ever experienced here,” he said.